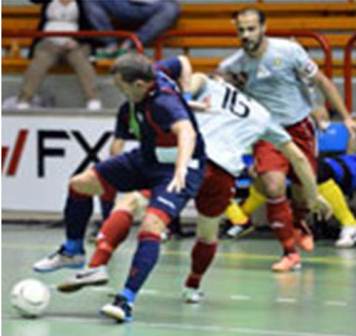 It wasn’t an easy game for both of the finalists.

Vittoriosa managed by Francesco Ronsisvalle played hard and managed to obtain a stunning victory against a well-organized Zabbar.

Zabbar missed Radoslav Kovachev and Nikolay Filipov which were both suspended.

On behalf of Vittoriosa, Darren Lynch and the goalkeeper Gabriel Mansueto were injured.

It was a very tight game but pleasant for all futsal lovers.

Later in the first half Vittoriosa came back aggressively and brought the score equal, by Leandros Calleja, Kurt Azzopardi and in the last minute Kenneth Spiteri put the ball at the back of the net from the penalty spot.

The second half came out to be a very interesting one with both teams fighting for each and every second to obtain possession and win the match.

Vittoriosa made it to the final with a brace from Darton Bugeja, another two goals from Leandros Calleja whose second goal came from a penalty and Kenneth Spiteri sealed the victory with his second personal goal.

The referees for this game were Adrian Caruana and Jude Amin Utulu, the Time keeper was Kristof Szakacs and the Third Official was David Balzan.

In the other semifinal, Balzan made it to the final with a sour taste against Pembroke.

Pembroke was in full squad while Balzan had missing Jovica Milijic who was sick and the goalkeeper Reuben Grech who was still injured.

After only a minute Gabriel Dobre put Balzan in the lead and doubled the score few minutes later.

Pembroke’s reaction was evident and managed to end the first half with only one goal difference by Karl Azzopardi’s goal.

During the half time most probably Balzan’s player and coach, Gabriel Dobre gave his players a harsh talk and envisaged them to be more concentrated during the rest of the game.

In the second half Balzan lacked a lot and they hardly managed to score.

Finally, Emil Andrei Raducu made them three goals for Balzan.

The referees for this game were Stephen Vella and David Balzan, the Time keeper was Robert Attard and the Third Official was Adrian Caruana.

Now Balzan will face off Vittoriosa in the final on Friday 2nd May 2014.