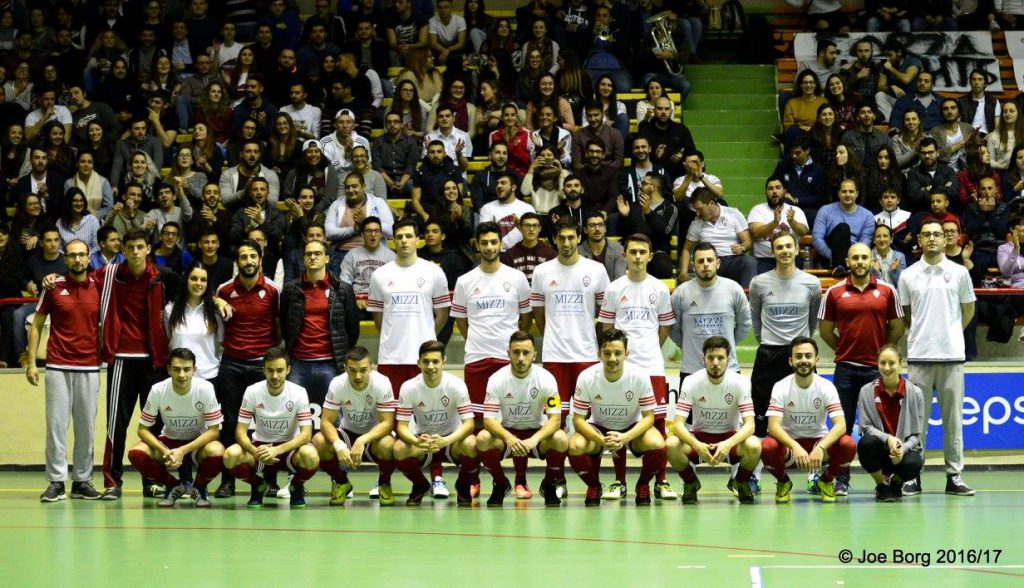 ROBERT BUSUTTIL
University of Malta are among the top five teams in Maltese futsal after obtaining a 1-1 scoreline from their match against Sliema.
A point was enough to get the students through to the Elite Round where they will be facing Luxol, Valletta, Swieqi and Hamrun.
It was an electrifying encounter which saw a very sizeable crowd at the Corradino Pavillion with over 200 University supporters in celebration mode after this historic result.
As the students’ mentor Kyle Sultana said, “This is a project that is ongoing and now we are getting the desired results.”
The latter were motivated to get this result and after surging ahead, they managed to control their more experienced opponents who struggled to find solutions in attack.
A win was the only result that the Wanderers wanted and although having more possession they didn’t find it easy to get through a very disciplined and organized defence.
This result also meant that Sliema will play in Division One as they failed to get the three points. Despite this result, Aleksandar Ribic, who was making his debut as player-coach, saw his team prolong their unbeaten run to six matches.
The match was a cagey affair as both set of strikers found the going tough against two organized rearguards.
University of Malta surged ahead on 12 minutes through Shawn Deguara to install a 1-0 advantage before the break.
In the second half, Sliema were a determined lot as they tried hard to turn the tables but the University keeper Matthew Gatt was in fine form as he performed a string of important saves.
After considerable shots at goal, Sliema managed to restore parity one minute from time after a counter attack which saw Uros Markovic’s low drive going past the students keeper.
The Wanderers tried all their best to get the goal that would have given them the Elite place but the University students kept their cool to qualify for the most prestigious round of Maltese futsal.

In another match played today, Swieqi Under 21 registered their second win of the season as they saw off Tarxien JMI 3-1.
This victory helped Kenneth Fiteni’s team to reach their opponents on the six-point mark to end a satisfying first round of matches.
Jurgen Ciantar, Dale Vella and Jamie Mangion were Swieqi’s goal getters.