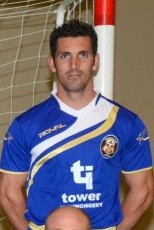 After two consecutive defeats, Zurrieq gained their first three points of the season by defeating Hamrun Spartans 6-3 in the only match played today at the Corradino Sports Complex.

Tyron Borg was the main protagonist of this match scoring all Zurrieq six goals.

For Hamrun Spartans this was their third defeat in four matches.

After this match both teams have three points with Zurrieq playing a match less.