The Malta Futsal national team, under the guidance of national coach Mark Marlow, will be in action between Saturday 29th November  and Monday 1st Decemmber, in the 4th Malta International Friendly Tournament at the Corradino Pavillion,

Malta will be hosting Serbia and Gibraltar, two teams which should provide strong opposition for Marlow’s boys.

After being named as the new national coach, Mark Marlow initiated the process of fine tuning the squad in the light of competitive international matches ahead.

This intensive preparation included some physical and tactical development  as well as some daily training sessions.

This website contacted Mark Marlow who showed the positive aspects of this squad and his first days as national coach.

“The first days were really positive for me. When you have a new squad in your hand, you feel motivated to work harder to achieve great goals for the benefit of the team.” 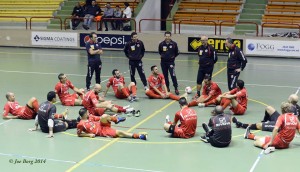 Marlow thanked the FMA for their response and collaboration with the MFA especially when changing some fixtures to accommodate the national team’s intensive training.

“We are working hand in hand with the FMA to achieve positive results and this can be shown by their continuous backing.”

Marlow underlined the fact that there are some new players in the squad that need time to adapt and settle down.

Finally, the new national coach urged all local futsal enthusiasts and supporters to come and support Malta in these two important matches.

This tournament should serve as a preparation for the national team ahead of the UEFA Futsal EURO Preliminary Round mini-tournament which will be played between the 13th and 18th January where Malta will be facing Latvia, England and Andorra.

A sizeable crowd is expected at the Corradino Pavillion to give the local boys the much-needed support which will eventually give a psychological boost in this high-tempo game.

The players selected by Marlow are: