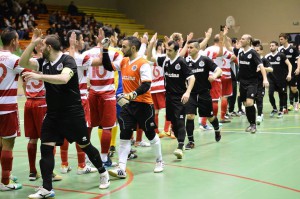 The FXDD Premier Division resumes today after an absence of one week with the first of three finals to be played tonight  between the two heavyweights of Maltese Futsal, Hibernians and Balzan (kick-off 20.30hrs).

Hibernians who won 20 out of 23 matches boast the best attack with lethal striker David Bobokhidze and Brazilian Celino Alves in fine form.

Despite all this, Hibernians really found it hard to impose their style of play in the much-talked-about semifinal against San Gwann. At times they showed a sloppy defence and seemed in difficulty in both legs.

The same opinion was shared by the Paolites captain, Xavier Saliba.

“We had a really hard semifinal. It was the most difficult one in my futsal playing career both personally and psychologically. San Gwann were a really hard nut to crack!”

“Hibs vs Balzan is always an attractive game to play. Both teams have played three times in this competition and managed to win a match each with the other one finishing in a draw. It will be a balanced match for sure.”

“Hibs have to improve on their latest performances, we have to  pay attention as every episode can decide the match.”

Even Balzan player Clint Cope seems to agree with Saliba’s comments as he said that every detail can give a new shape to the match.

Cope, who scored some decisive goals in this campaign, admitted that it will be a very tough match.

“Hibs are difficult opponents to play against. They have showed all this during this season.”

Balzan have the best defence in the league having conceded only 45 goals. The team led by Gabriel Dobre is aiming for a double after having already won the FXDD Knock-Out competition.

“All the hard work that we’ve done during this season must be translated into the pitch during these three finals.”

Cope believes that it’s important to gain a good advantage in the first leg to be mentally prepared for the second one.
Christian Wismayer thinks that tonight’s match is not a normal one.
“Whoever succeeds in winning tonight’s match can have a psychological advantage to face the second match with confidence. I preview that it will be an action-packed match”
Hibernians and Balzan will be played on a best-out-of-three match format. Each game played should have a clear winner. If a game ends on a draw after playing the normal time, penalties will be taken immediately after, to determine the winner of the game. If the same team wins the first two games successively, that team is proclaimed champion and the third game is not played.