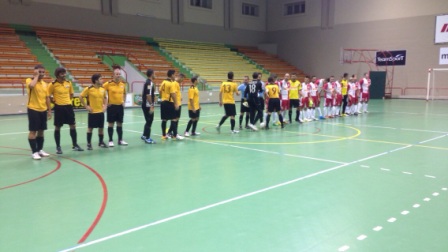 Nikolay Filipov was Mellieha’s inspirational player as he scored a hat-trick to help his side overcome Msida 8-2 after the first round of matches from the Futsal First Division was played at the Corradino Pavillion.

It was a dream start for Mellieha who were making their official debut in the local futsal scene. Moreover other newcomers Attard, Lija and Mdina finished unbeaten in their first league commitments.

Bulgarian duo Radoslav Kovachev and Nikolay Filipov were a continuous menace to the Msida defence as Mellieha produced a remarkable second half to bag the first three points at stake.

The first half was a balanced encounter as Mellieha always took the lead but Msida found time to pull two goals back to pile some sort of pressure to their opponents.

But in the second half, Mellieha completely dominated the proceedings and scored five goals to rubberstamp their first official victory of the season.

Mdina and Mqabba shared the spoils 3-3 in an entertaining match.

For Mdina this was their first match in the local futsal scene.  Mqabba gained a double advantage in the first half but Mdina pulled one back before half time.

In the second half Mdina reacted quite well and managed to score the draw a few seconds before the end.

Etienne Rodo, Thomas Consoli and Wayne Mizzi put their names on the score sheet for Mqabba.

Cleaven Portelli, Matthew Gatt and Dalziel Bugeja scored Mdina’s first official goals in the futsal First Division to level matters for their team and gain the first point of the season.

Lija made a great debut in the local futsal scene after beating Luqa 5-3.

Lija surged ahead through Jeremy Cutajar and Zeljko Anicic doubled the score four minutes later. Andrew Scerri pulled one back for Luqa while Isaac Delmar with a spectacular shot restored parity 2-2.

In the second half, Luqa tried to offer a good reaction but found Lija’s keeper Stefan Vella in fine form.

Zeljko Anicic added another goal to score a brace and make the final score 5-3 for Lija.

Attard and Birzebbugia shared a lively 2-2 draw in an evenly balanced match. The former, who were marking their first appearance in the First Division, scored their goals through Aaron Camillieri and Duncan Bonello.