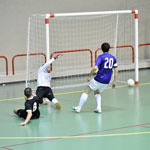 Both Hibernians and Luxol are ready for tonight’s challenge at the top of the table.

Their last meeting was nearly 4 months ago, where Hibernians qualified for the second round of the FXDD Knock Out competition when they defeated Luxol 1-0.

In a very tight game, the deadlock was broken five minutes from time thanks to a goal by Xavier Saliba that made the Paolites celebrate the qualification to another round of this competition.

Both of them have a perfect record so far as they have won all the matches played in the championship. Despite all this, Hibernians suffered shock elimination from the Knock Out competition in the second round after being ousted by Zabbar 5-4.

This website contacted Luxol’s player coach Florin Anton about tonight’s big match. He said that it will be a difficult match for Luxol as Hibernians are given as favourites. He continued that they also have their chance to win with a squad made up of experienced players in futsal.

On the other hand, Hibs’ Captain Xavier Saliba told us that though tonight’s game is an important one but it’s not a decisive one. There are still many games to be played in the championship and it’s premature to determine where the title is going. Saliba also said that this will be a tough game like the one against Balzan. Finally the team is prepared to give the 100% and win this match too.

Certainly it will be an entertaining match and we hope to have a good crowd at the Corradino Sports Pavilion.