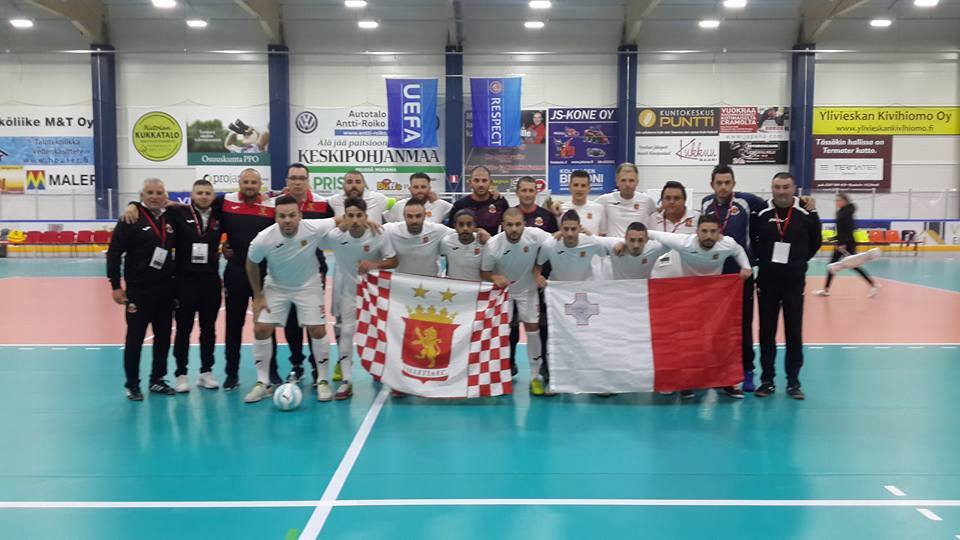 State University swept past Valletta 6-0. Former Hibernians player David Bobokhidze scored a brace while Archil Sebiskveradze from the penalty spot, together with Shota Chanukvadze, Nodari Kurtsadze and Nikoloz Kurtanidze added one each for Tbilisi. This was the second match from Group F of the UEFA Futsal Cup preliminary round, played in the Ylivieska Ice Arena in Sievi, Finland.
Valletta seemed to obtain a positive grip of the game as they took their chances, so much so that Denis Di Maio also hit the woodwork. The goalkeeper Neil Cuschieri did his job wonderfully, reflected in the number of saves from his part.
The first half had a mild effect on the Citizens’ motivation as the Georgians scored only in the final three minutes through Bobokhidze.
The second half however was a completely different story. Tbilisi State University took complete control of the game and scored another five goals. From Valletta’s side, Milijic, Augusto and Saliba each made an attempt to score, while Cuschieri committed a foul which led to a penalty which was also booked.
This win puts Tbilisi State University in a better position to be the leaders of Group F. Next Saturday, they will have a decisive encounter against hosts Sievi Futsal. The latter are set to play later today against Wattcell Futsal Club, who similar to Valletta have no chance for qualification.
Valletta’s adventure in the UEFA Futsal Cup preliminary round will end next Saturday, with the last match against Wattcell Futsal Club.