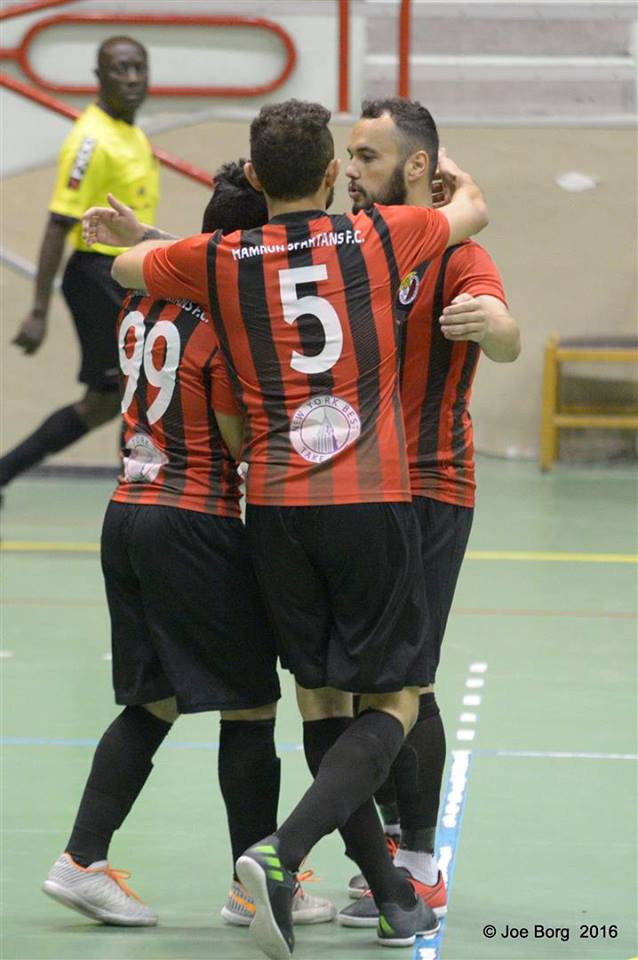 Champions Luxol were punished at the death as Rodrigo Ticz Patricio fired home the winning goal to earn Hamrun a precious 6-5 win in the top-of-the-table clash played yesterday at the Corradino Pavillion.
The product of their combined efforts was a pulsating encounter that produced eleven goals, five of which came in a frenetic 10-minute spell in the second half with the Spartans having the last laugh after coming from one goal down to eclipse Luxol.
A draw would probably have been a fairer result but the Spartans, who had the better of the early exchanges, will surely beg to differ after staging such a remarkable comeback.
The reward for their fifth victory on the trot could be a leap at the top of the table for the Spartans should they win their last match against Swieqi, to go one ahead of their vanquished opponents.
The Spartans had the better start, but it was Luxol who surged ahead on seven minutes when Mark Zammit met an Alves corner to slot home past Mifsud.
This goal didn’t discourage Hamrun as they drew level one minute later when Raphinha freekick finished at the back of the net.
The goals kept coming as Florin Anton restored Luxol’s advantage after a quick counter attack.
Adrian Attard, the Luxol custodian, was twice called to parry away efforts from Brazilian Melo Jose.
But on 16 minutes, Attard couldn’t stop Hamrun to equalize as Peter Pullicino advanced from the flank to find Raphinha ready to tap in.
This goal gave the hearty Spartans more courage to venture forward and they managed to score their third goal before the interval as Rodrigo piledriver finished behind Attard.
The second half started with a bang as after just five seconds, Hamrun netted their fourth through Michel Melo Jose who stunned Attard with a great shot.
Two minutes later, Luxol were awarded a penalty as goalie Mifsud floored Clint Cope inside the area. Consequently William Barbosa saw his shot well saved by Mifsud.
On 28 minutes, the St Andrews side were awarded another penalty when Rodrigo touched the ball inside the area with Glenn Bonello ready to convert the maximum shot.
Luxol were now in buoyant mood and succeeded in turning the result through goals from Celino Alves and William Barbosa.
Paul Rapa, the Hamrun mentor, opted for Peter Pullicino as the flying keeper to instill more pressure on the Luxol rearguard.
This move paid dividends as the Spartans levelled the matters to 5-5 as Jason Mifsud met a precise pass from Raphinha.
The match was seemingly on course for a draw but it was Hamrun who had the last laugh as they scored the dramatic goal on the stroke of time.
It was Rodrigo who received a last throw from keeper Mifsud to storm in and arch the ball over the onrushing Attard to the delight of the the Spartans clan.