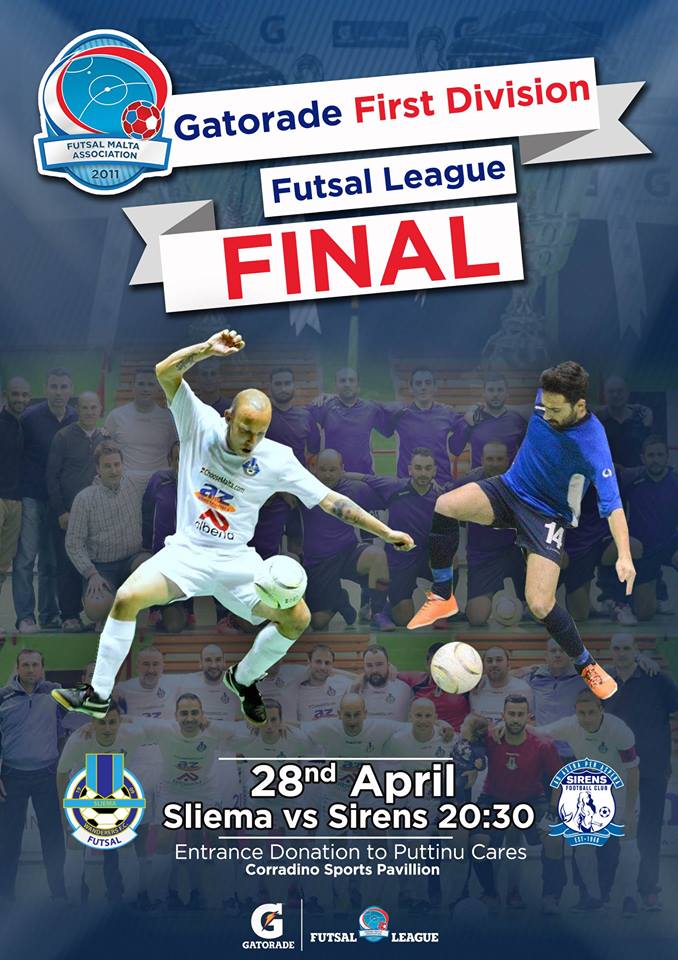 Sliema and Sirens have their eyes set on wresting the Gatorade First Division Cup as they face each other tonight in the final at the Corradino Pavillion.
Both teams broke little sweat in setting up this season’s title showdown as the St Paul’s Bay outfit breezed past Zebbug Rangers 6-2 in the semi-final while the Wanderers had the better of Mqabba 6-4.
There is balance also in direct clashes this season with Sirens seeing off Sliema 2-1 in the first round with the latter taking sweet revenge in the second round by winning 7-2.
Despite enjoying a positive second round, Sliema’s mentor, Paul Carabott is wary about tonight difficult task ahead.
“It’s going to be a very tough game against a team who is motivated to do well.”
Carabott admires the tactical discipline that Sirens always adopt during their matches.
“Sirens are a very disciplined squad. Their coach is well-prepared and has a lot of experience in these play-off stages.”
The Wanderers’ coach is happy with his players as they always give their hundred per cent on the court.
“The unity of the squad has helped Sliema reach these important targets,” concluded Carabott.
The Blues hope that their experienced players, Aleksandar Ribic, Paul Bugeja and Eslam Khalifa will be in their tip-top form to help them clinch the title.
On the other hand, Sirens’ coach, Keith Borg, is focused on this big event.
“Our teams is well-prepared both mentally and physically. We are looking forward for this match.”
“We have made a great achievement and for most of our players, this is their first final ever.”
Borg admits that they didn’t believe that Sirens would participate in this final.
“When we started the second round, we knew that all First Division teams were well-equipped. Despite all this we persevered and now we are in the final.”
Asked about his opponents, Borg is cautious.
“We know that Sliema have a lot of experienced players and good quality foreigners. Therefore we respect our opponents and hope that it will be a great game.”
Sirens believe in the form of their striker Ryan Gilmour Cassar who scored a record 22 goals since joining the St Paul’s Bay outfit in January.
Tonight’s match kicks off at 20.30 hrs.