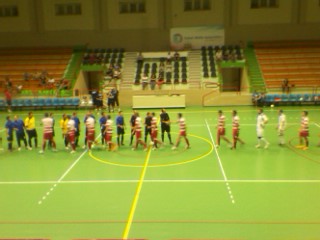 FXDD Knock Out holders Balzan qualified for the second round of this competition after winning 5-3 against Sirens. Despite the win, the holders found a gallant Sirens side that controlled well the proceedings with an organized defence and a swift counter attack that even produced three goals.

After their Super Cup triumph, Balzan looked clear favourites to win this game against the first division side. It was labelled as a “David against Goliath ” clash with Balzan that were  expected to dominate this match and score a lot of goals.

But as the game progressed, the Premier Division giants found the going tough, even got nervous and made a lot of mistakes in front of goal. On the other hand, Sirens defended like gladiators and rarely missed a ball in the defence department.

It was in the eighth minute that Balzan broke the deadlock through player-coach, Gabriel Dobre after a rare Sirens blunder.

In the second half the same Dobre doubled the score after a great shot. Despite all this Sirens didn’t give up and surprisingly scored through James Tabone after a freekick.

Balzan looked disoriented and it was no surprise that James Tabone scored a brace and levelled matters for Sirens.

Balzan were pressing more and regained the advantage through Zeljko Anicic but the St Paul’s Bay side replied immediately with a Darren Aitchinson goal.

Three minutes and twenty seconds were left till the end of the match and Gabriel Dobre found the goal and the personal hat trick after a deflection that surprised Sirens keeper Bruce Debattista.

After this goal Sirens lost motivation and Glenn Bonello made it 5-3 with a great shot that beat Debattista to put Balzan through the second round.

Before this match Jamie Portelli was in the limelight after scoring a brace for Zebbug, helping  his team qualify in the derby against Siggiewi. Steve Mifsud, Bernard Bonnici (penalty), Kenneth James and Alan Zammit scored the other goals for Zebbug who accomplished their objective to qualify for the second round of this competition.

After this first round of matches the teams that qualified for the second round of the FXDD Knock Out competition are: