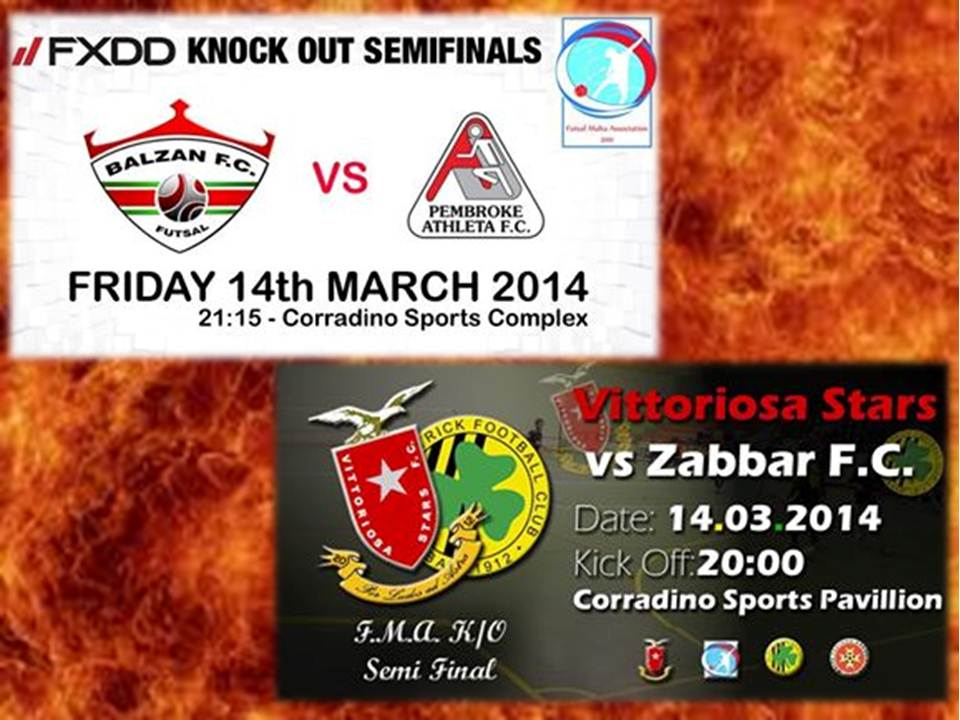 Vittoriosa have reached the last four of the competition by using only home grown players and now stand on the brink of another landmark in the club’s history. A win next Friday would see them in their first Knock-Out Final but first they have to get past Zabbar St Patrick.

Zabbar St. Patrick made a great hit when eliminated Hibernians before they met Gzira in the quarter final. Zabbar made it to the semifinal after beating Gzira on penalties 5-4 in a very sensational game.

The other semi-final is between one of the top clubs in Malta’s Futsal, Balzan who will play against Pembroke Athleta.

For Pembroke, this is a particular game, since most of the players used to play with some of the Balzan’s players before Balzan Futsal took over Bidnija Futsal Team.

Pembroke are aware that next Thursday will be playing against one of the best futsal teams in Malta, with very good Maltese National players and International foreign players.

However, Pembroke’s coach is keeping the team concentrated and focused on the game. The coach’s directives are to play a collective game. The players are training hard and a concentrating because it is going to be a difficult but not impossible game. It all depends how much they’re going to play as a collective team.

Balzan will make everything to keep the cup in their premises. On their road to they started against Sirens. It was not an easy task but they managed to beat Sirens 5-3. Afterwards, against a well-organized Qormi they won with the score of 6-1. Finally in the Quarter Final they eliminated Swieqi United for 10-0.
For sure it will be a tight match as Pembroke possesses a very good young squad and are fighting for a top four playoff spot. Balzan’s positive mentality can reach the finals and could be a good test before the playoffs later on in the season. Balzan’s coach Gabriel Dobre has almost full squad for his disposition except goalkeeper Reuben Grech who is on the side-lines for few weeks more.