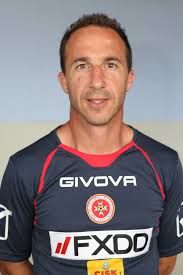 Peter Pullicino could not have had such a dream debut as Malta’s futsal national team coach as his team achieved a double victory over San Marino away from home soil.

On Saturday the Maltese boys dominated the match to win 5-1 while the following day they repeated their feat by winning over their opponents 5-3.

This website spoke to Peter Pullicino, who seemed completely satisfied after this positive experience.

How do you describe your debut with the national team?

My first time as national coach was an incredible experience and success thanks largely to the players. The players worked unbelievably hard in the short time we had.

What were the positives and maybe negatives of these two friendlies?

The massive positive from the trip was how the spirit of the group was transferred to the court. The whole group worked as one to gain the positives outcomes .

Amazingly I cannot think of any negative from the trip abroad. The only negative is the fact that I will not work with the players for another 2 weeks.

How are you preparing your team ahead of the FIFA qualifiers?

To prepare for the qualifiers , the group will again come together on the 12th of October and we’ll work on situations learned from the trip to San Marino as well as analyze our upcoming opponents.