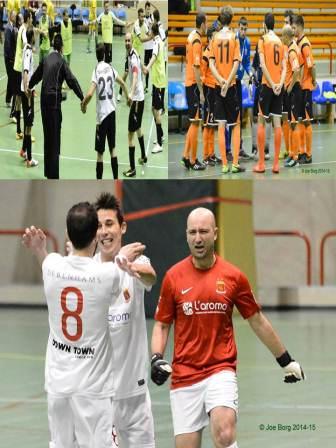 This week ended up with further emotion for all futsal lovers at the Corradino Sport Pavillion.

The match of the week in the Premier League between Qormi and Valletta gave a step forward to Valletta in the race for the 4th place.

The game was a thrill for both sides, with high tension periods filled with fouls and even two players for Qormi were sent off.

It was Qormi who opened the score after four minutes play through Basil Emeka Onuta. This was followed by a quick reaction from the Citizens through Xavier Saliba’s immediate brace.

It didn’t appear to be the day for Qormi as Valletta scored again, when Denis di Maio’s shot was deflected by Luke Stivala. The first half ended 4-1 with a goal from Valletta’s new acquisition Javier Montes Burgos.

Marwan Tellisi and Blendi Gockaj reduced the score for Qormi.

Luxol, the Premier’s leaders, found it hard to beat Zebbug Rangers who are still without points. The former’s main protagonists were Ibrahim Tarik and Celino Alves, who scored four and three times respectively. The end result was 10-5 for Luxol.

Hamrun Spartans remained one point behind Luxol as they easily dominated Gzira United, where Raphinha scored four of the fifteen goals. The match ended 15-1, the highest score in this futsal season.

Swieqi United continued to impress as they dominated Mosta with the result of 7-2. Swieqi’s player of the match was Andrew Sammut Alessi who made a hat-trick.

The premier league resumes on Thursday and Friday with the following games: