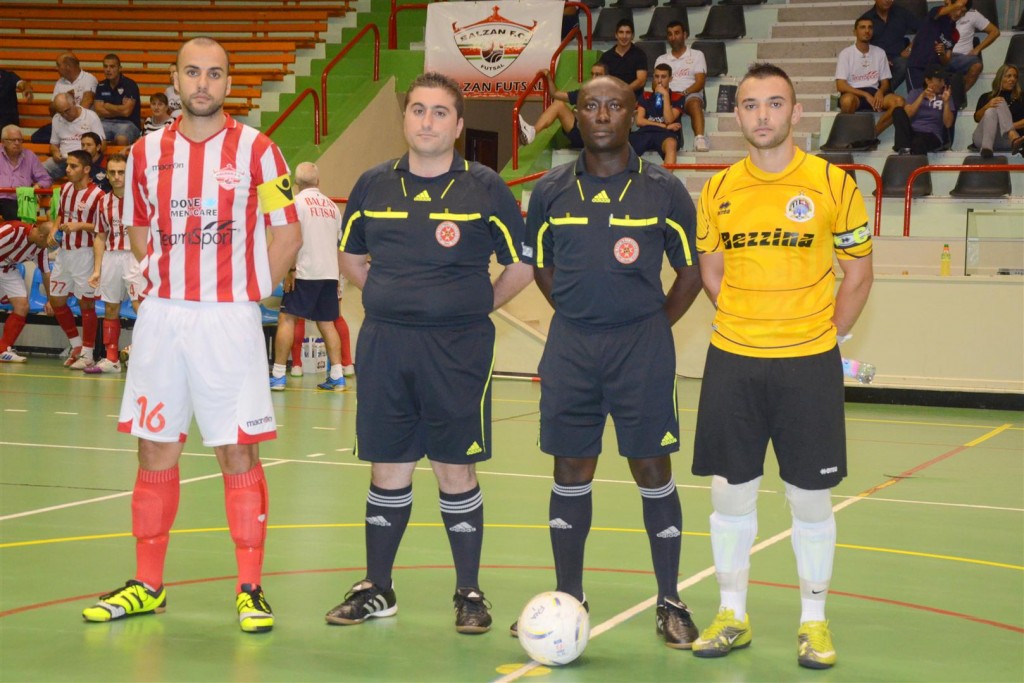 The match of the week between archrivals Balzan FC and Hibernians FC certainly lived up to its expectations. In front of approximately 250 spectators, one of the biggest crowds ever seen at Corradino Sports Pavilion, current champions Balzan FC and Hibernians FC fought it out till the last seconds. Balzan started well in the first half of the match, and managed to set a 3 nil advantage. It was their Romanian player coach Florin Anton that who scored in the 7th minute. Basil Emeka Onuta who scored Balzan’s second goal in the 11th minute and two minutes before half time it was Florin Anton again who put Balzan three up before both teams entered the changing rooms for half time. When everything looked doom and gloom for Hibernians, Coach John Mizzi included the Maltese Futsal National team player Cedric Sciberras in the line-up and this helped Hibernians to adopt a more aggressive approach to the game. 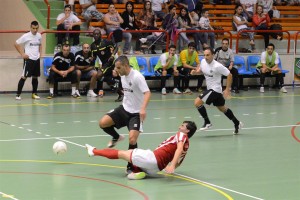 As Hibernians level of confidence grew, Balzan FC’s lost their concentration and Hibs managed to scored 5 goals in 5 minutes. Tarik Ibrahim, another Maltese national team player and ex-Balzan FC player, scored the first goal in the 21st minute, an own goal by Glenn Bonello in 22nd minute. Tarik Ibrahim levelled the scored in the 25th minute. Within the same minute, Captain of the Bulgarian futsal national team Boycho Marev and Cedric Sciberras score the 4th and 5th goals respectively. The numerous Paola supporters were over the moon with their team watching their team come from behind to gain this lead. Balzan’s Basil Emeka Onuta pulled one back in the 28th minute but the drama was not over yet as Balzan brought on Matthew Xerxen to deploy the flying goalkeeper tactics but it was Hibernians’ player Tarek Ibrahim once again who took advantage of a vacant goalpost and scored Hibernians’ 6th goal from his half pitch. 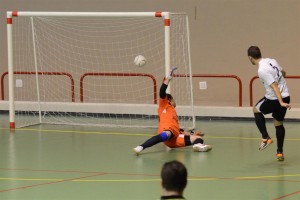 With only one minute left on the clock the three points looked like going Hibs’ way and with the fans already celebrating long awaited victory against their direct rivals, but Glenn Bonello had different intentions, the latter managing to score two goals in less than 40 seconds. Bonello’s euphoric celebrations brought his sending off as he took off his shirt in front of the Hibernians Supporters. The game ended with an amazing score of 6-6.

In the other game played on Tuesday, Tarxien Rainbows, although fielding a depleted side, managed to snatch 3 points thanks to their Spanish player Christian Cuadros Silva scoring all 4 goals. Nikola Petrovic and Vojko Martinovic scored the goals for St. Andrews. Final score Tarxien Rainbows 4 – 2 St. Andrews.

The Premier Futsal League continued on Friday night. Floriana and Zejtun Corinthians kept their pace and overcame Lija Athletics and Sliema Wanderers respectively, earning them top spot after 3 matches. Floriana’s task seemed more difficult considering that Lija Athletics have always been firm contenders to win the League for the past years. It was in fact Lija that opened well through Erjob Beu but Floriana kept closing the gaps. Half time score Floriana 3-4 Lija. In the second half, Floriana game from behind to level the score through Andre Mamo From then onwards Floriana took full control of the game with Kurt Bartolo steering his side to an important win. Game finished Floriana 8 Lija 5.

In the second game on Friday, Zejtun cruised past Sliema Wanderers, despite Sliema fielding a stronger opposition compared to their previous games. Zejtun captain Jesmond Micallef’s performance was once again outstanding. Backed by a good number of enthusiastic supporters Zejtun maintained their composure throughout the game and Sliema’s reaction in the early stages of the second half was not enough to narrow the scoreline gap, final score Zejtun 9 -5 Sliema. With this third consecutive Mario Gaffiero’s side joins Floriana momentarily at the top of the table.