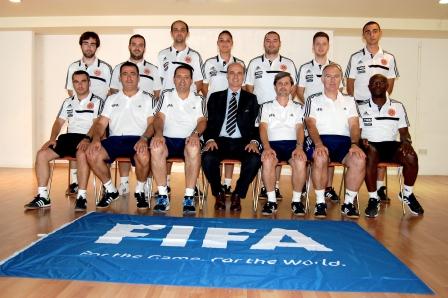 The seminar was held at the Downtown Hotel in Gozo and was conducted by FIFA Instructor and UEFA Head of Futsal Pedro Angel Galan Nieto from Portugal.

The aim of the seminar was to enhance local Futsal referees’ performances and to create uniformity of decisions based on the latest FIFA/UEFA instructions.

Pedro Angel Galan Nieto focused on the Latest Amendments to the Futsal Laws of the Game, the Personality of the Referee, the Evaluation of Referees’ Performances from Referee Observers and the Uniformity in Interpretation and Application of the Laws of the Game through power point presentations and illustrations with video clips from the last Futsal World Cup held in Thailand in 2012 and the Futsal European Championship held in Belgium earlier this year.

He also conducted two practical sessions with all participants (referees and observers), and practical exercises with fun games aimed at using appropriate and uniform refereeing signals.

In his concluding address at the end of a successful 3 days, Pedro Angel Galan Nieto told the participants that this year FIFA had approved only 5 requests out of 132 that were submitted for the organisation of a FIFA Futsal Seminar, one of them being Malta.

Present for the seminar closure and presentation of FIFA Certificates to all participants was also Director of Refereeing Adrian Casha, who thanked FIFA for its support to develop further Futsal refereeing in Malta.