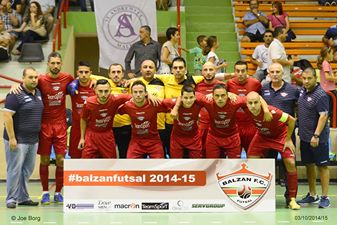 Champions Balzan began their defence of the league title in style as they saw off promoted side Gzira United 7-4.

Despite losing, Gzira never threw the towel and had enough chances to get back on level terms but experienced duo Despotovic-Marev ended their hopes of springing an upset at the Corradino Pavillion.

In fact both Frane Despotovic and Boycho Marev hit a brace while Glenn Bonello, Nicola del Re and an own goal by Sean Micallef added more goals for Balzan.

Alessio Restuccia,  Luke Stivala, Ruben Mellado Burguillo and an own goal by Mark Zammit were on the mark for Gzira.

Even championship contenders Luxol had a positive debut as they beat Swieqi 7-3.

Zvesdan Vukovic was the main protagonist of this match as he scored a hat-trick for Swieqi but had the misfortune of netting two own-goals.

The Spartans dominated the proceedings from the very beginning and scored their most important goals through two braces by Rogerio Filho and Paul Bugeja while Jovica Milijic, Andy  Mangion, Nemanja Radojicic, Michael Spiteri and own goal completed the score line for Hamrun.