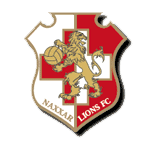 Naxxar Lions have been participating in the Futsal league for the past three seasons. It all began when Keith Borg and Martin Attard, assembled a squad from some former local players. The squad who participated in the Third Division performed well in the past two seasons and last seasonthey failed to get promoted to an upper division by a whisker.
This year with the downfall of Floriana Futsal (ex. Todos Futsal), former coach and goalkeeper Martin Attard decided to merge some of the former Todos Futsal players with the rest of Naxxar Futsal Club.

Hibernians and National team duo, Kurt Bartolo and Daniel Brincat were appointed as team coaches. Keith Borg,who is still recovering from an injury, will continue to help in the future. Some new faces were added to the squad with the clear objective of enhancing and giving more experience to this team.

This website contacted Naxxar goalkeeper, Martin Attard. He told us that for the coming season they didn’t set a proper objective. Despite all this they believe in the potential of this squad. If this team works collectively they can achieve important results.

This is the full squad of Naxxar Futsal Club: