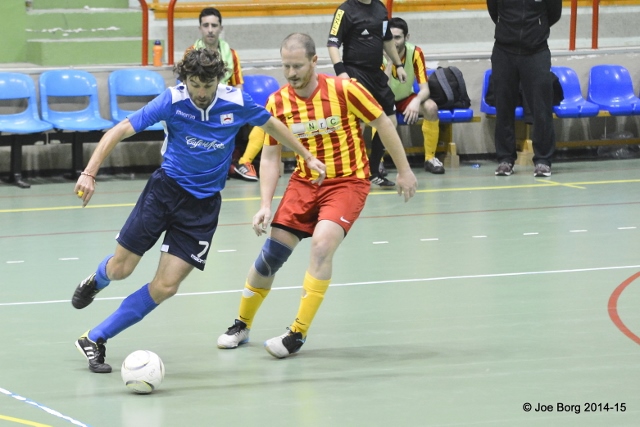 Lija Athletics beat Naxxar Lions 2-0 in a match where they didn’t impress so much. This victory helped them to become firm favourites to win the championship after having clinched the promotion earlier on.

Lija were unlucky not to score in four occasions as they hit the post after tries from Ribic, Manea and Del Re. On the other hand, Naxxar tried to offer a good reaction but weren’t so dangerous in front of goal. Floren Manea and Zeljko Anicic were on the mark for the Athletics.

It was a match which highlighted the progress made in the last part of the season by Silvio Mifsud’s boys who had inspirational players Jean Paul Abdilla and Andrea Cutajar a continuous menace to the Luqa rearguard.

Attard ensure their place in the playoffs after beating Mqabba 4-1.

Player and coach Kevin Loughborough, Adrian Lee, Clayton Farrugia and Matthew Buttigieg made it through a much important win for Attard.

Msida grabbed their fourth consecutive win which keeps them very close to Attard, which means close to the playoffs, after beating Qrendi 5-4.

Msida made it through braces from Zvezdan Vukovic and Marian Gologan, together with a goal scored from Chris Cutajr.

It was a night to remember for Mdina Knights’ players and the numerous University mates, who came enthusiastically to watch the game at the Corradino Sport Pavillion.

It was quite a balanced encounter between Mdina and Sirens, where the second half determined who was going to win.

Jason Camilleri broke the dreadlock for Sirens, after the first seven minutes of play.

Mdina reacted fiercely with a brace from Dalziel Bugeja, putting the Knights at rest during the half time break.

In the beginning of the second half Sirens looked to be more organized but Cleaven Portelli managed to increase the score for the Knights.

But Mdina Knights gathered all their forces to come out victorious, when Neil Cauchi and Cleaven Portelli’s second goal made the final score 5-4.

Absolutely the Knights were led by their goalkeeper Matthew Gatt who was superb and managed to save one of the two freeshots awarded to Sirens, taken by Pierre Spiteri.

The other freeshot was sent off target by Jason Camilleri.

Promoted Mellieha cruised to an emphatic 11-0 win against Siggiewi.

Siggiewi ended up completely exhausted and unfortunately Steve Gingell Littlejohn did an autogoal which marked the eighth goal for the Northeners.

The First Division league resumes next Thursday with the following matches