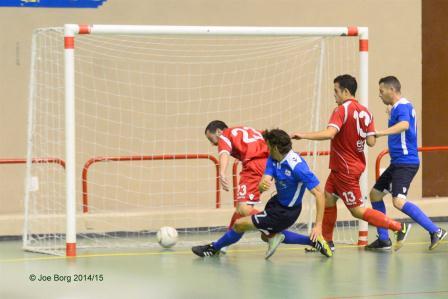 From Tuesday’s First Division matches, Mellieha keeps on winning and gives Naxxar the first defeat.  Attard moves forward and Mdina still can’t get their first win of the season.

Mellieha who already had a four goal advantage in the first half, sealed a 6-2 victory against Naxxar. In the second half, Naxxar took the risk and started playing with the flying keeper and managed to score two goals through Daniel Brincat and Kurt Azzopardi. Daniel Brincat was sent off after receiving two yellow cards.

Nickolay Filipov’s hat-trick, together with goals from Radoslav Kovachev, Graig Pickard and Robert Magro made them five out of five for Mellieha.

Even though Mdina played the best futsal, creating loads of chances, much more than Attard, still they couldn’t get their first win.

In the 13th minute, Dalziel Bugeja broke the deadlock and put Mdina in advantage. Two minutes from the end of the first half, Attard’s captain Matthew Buttigieg levelled the matters.

In the last gasp Buttigieg scored the decisive goal for Attard.

Mdina had to suffer two red cards, one for Tyrone Grech and one for Coach Kyle Sultana.

In tomorrow’s encounter, Hamrun will try to comeback after last week’s defeat against Luxol while Gzira will try to get the first win of the season.