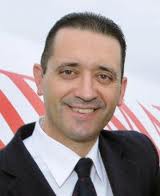 The meeting, which took place in a very friendly but professional atmosphere, was focused on the relationship between the FMA and Futsal Refereeing Unit. Both sides emphasized the excellent collaboration that exists between them and the fact that they share the same vision for the development of Futsal in Malta.

FMA President expressed his satisfaction and appreciation for the job Futsal Refereeing Unit is doing and also the support that Director of Refereeing is providing to Futsal Referees. He also gave an outline About FMA’s plans and strategies for the further development of the Futsal Game.

On the other hand, the Director of Refereeing, Mr Casha, thanked FMA officials for the good job they are doing for the Futsal Game in Malta and emphasized the positive changes which have taken place and that are tangible. He explained how the restructuring of Refereeing Department took place and promised his support to Futsal Referees from the MFA Administration. Mr Casha emphasized also the good job that Futsal Unit, namely Mr Gjergji Bitri and Mr Stephen Mallia are doing and the positive feedback received from Futsal Referees in this regard.

In the conversation various issues were identified mainly security during Futsal Matches. Although there were only two separate incidents concerning referees so far this season, the referees asked FMA officials to step up the security, in view of the increasing number of spectators especially in Premier Division.

FMA President in reply to these concerns about security explained that measures have been taken in this regard. FMA President mentioned that the FMA is monitoring the various divisions and identifying possible games that will need Police presence.

At the end, both sides expressed the willingness to continue this collaboration and have other meetings in the future.