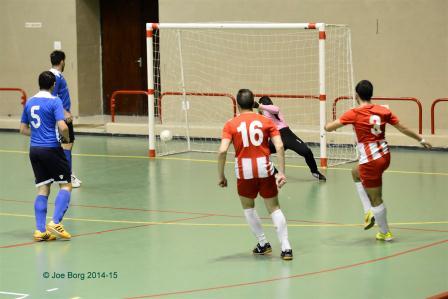 Mdina youngsters stunned title contenders Mellieha as they saw them off 6-4 in a thrilling match.
The Knights defended boldly and managed to annul their opponents’ prolific scorers to register their seventh success of the season.
The last minutes were exciting as Mellieha fought back with two quickfire goals but as Filipov missed a freeshot one minute from the end, Cleaven Portelli rubber-stamped Mdina’s victory.
Ronald Portelli netted a brace, Neil Cauchi, Cleaven Portelli, Roberto Sarcia and Andrew Camilleri were on target for Mdina.
Nikolay Filipov hit the target twice as Radoslav Kovachev and Daniel Saliba added more goals for the Northerners.

Msida vs Luqa 6-4
A relatively balanced encounter between two teams having the same number of points and chasing a place for the final play-offs.
Luqa were better in the first half as they were operating on swift counter-attacks.
On the other hand, Msida relied on the flair of Zvezdan Vukovic and Ryan Xuereb who admistered most of his team’s attacking options.
Msida had their final say when they hit their opponents in the most important moments of the match.
Msida had attacking duo Vukovic and Xuereb who struck a hat-trick while Andrea Grech, James Mizzi, and a double by Andrew Scerri were the goal-getters for Luqa.

Naxxar vs Sirens 3-3
A goal scored 7 seconds from the end gave Sirens a dramatic 3-3 draw against Naxxar Lions.  The latter didn’t produce a convincing performance and were punished by the never-say-die Sirens to drop two important points for the third place.
Naxxar’s scorers were Daniel Brincat (2 goals) and Christian Wismayer.
Lawrence Vella (2 goals) and Kenneth Zammit put their names on the score sheet for Sirens.

Mqabba continued their positive trail in another interesting and pleasant match against Qrendi. The first half was relatively balanced and ended 4-4. Mqabba scored through Alex Falzon’s goal, an immediate brace from Steve Falzon and Carlsten Xuereb, while Qrendi replied with Antonello Brincat’s hat-trick and a goal from Sam Vella.

In the second half, Mqabba were absolutely dominant as Steve Falzon scored two more goals, accompanied with Conrad Dimech and Owen Fiteni.

Maxime Landais scored in the second half and managed to reduce the gap against their opponents.

Attard found an easy opponent and made it through Adrian Marin Zalba’s hat-trick, braces from Antonio Camilleri and Kevin Loughborough and goals from Clayton Farrugia and Jerry Christopher Fabbro. The ninth goal has been deflected by Steve Gingell Littlejohn.

Unfortunately the second half was really disappointing and boring with a lot of time wasting and lack of initiatives.