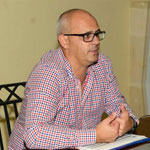 Futsal National Coach Mark Marlow named a provisional 18-man squad ahead of the forthcoming UEFA qualifiers to be played in Malta between the 13th and 18th January 2015.

The players selected by Marlow are:

Malta were paired in Group E of the UEFA Futsal EURO Preliminary Round alongside Latvia, England and Andorra.