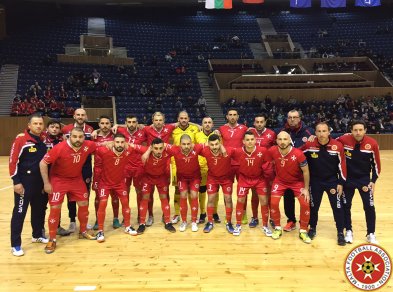 A spiriting first-half showing was not enough for Malta to open their account in Group D of the 2018 European Futsal Championship Preliminary Round as Peter Pullicino’s men conceded a 6-1 defeat to hosts Bulgaria this evening.

The Maltese team, who had also suffered a 6-1 loss to England in their first group game on Tuesday, held their own in the opening period but were unable to convert the chances that came their way.

Jovica Milijic missed an inviting opportunity early on while Xavier Saliba failed to score from the penalty spot on 14 minutes.

Bulgaria, who were beaten 7-1 by Albania in their opening game on Tuesday, had to wait until the 19th minute to open the scoring through Plamen Stoykov.

The hosts sealed their victory in the second half as Stoykov was on target three times to take his tally to four goals while Martin Ivanov and Daniel Nestorov got the other goals.

In today’s other game, Albania inflicted a 5-1 defeat on England to maintain their perfect record, in the process securing qualification to the next round of the 2018 Euro Futsal Championship.

Malta face Albania in their final group match on Friday at 4.30pm while Bulgaria and England, both on three points, meet in the other game.