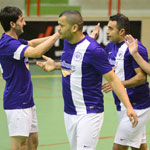 Second placed Luxol found no difficulty to see off fourth placed San Gwann 7-3. Both teams were already qualified for the final play-offs to be played next week.

Luxol had William Barbosa missing in their squad for this match.

They surged ahead  after one minute, when player/coach Florin Anton directed the ball past San Gwann keeper Matthew Mifsud.

Luxol were completely dominant in the initial five minutes with the San Gwann rearguard absorbing their opponents continuous attacks.

On the other end, Luxol doubled the score on 12 minutes, when Noel Bray found himself unmarked to put the ball into the net.

San Gwann were unlucky not to score after Nizar Abouisha’s shot hit the post four minutes from the break.

Luxol went close to score their third goal but Ibrahim Tarek’s shot was repelled before the line by Andy Mangion.

One minute from the break,  Emeka passed to Ibrahim Tarek who tapped into the net to score Luxol’s third goal.

In the second half, Luxol continued to dominate the proceedings as Dale Camilleri, George Frendo and Karl Saliba added three more goals for their side.

San Gwann got some pride as they pulled a goal back through Andy Mangion.

This goal proved to be an injection for the San Gwann side as they were venturing forward in search of more goals.

They were awarded a penalty when Luxol’s keeper Attard floored Shawn Vella. The same player made it 6-2 after converting successfully the maximum shot.

But seven minutes from the end a Luxol counter-attack produced their seventh goal as Dale Camilleri fired the ball into the net to complete a personal brace.

San Gwann had the time to score another goal through captain Alan Borg who made the final score 7-3.