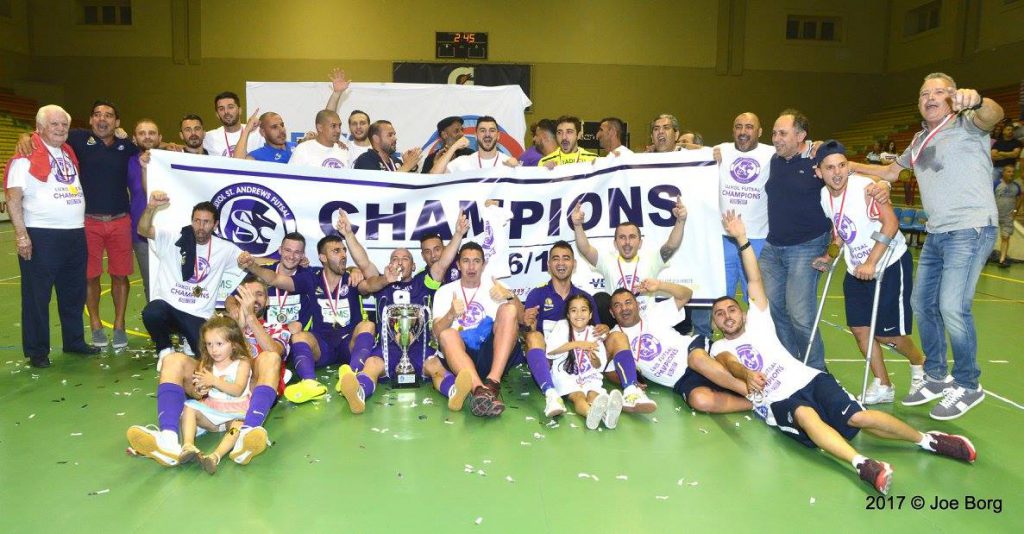 STEPHEN AZZOPARDI
Luxol were declared as champions of the Elite when they defeated Valletta with a 7-5 score. This third and last final which was termed as the bestest game of this season, took place in a high pitched atmosphere in the presence of a record attendance including the MFA President Norman Darmanin Demajo and the Vice President Matthew Paris. Above all this game served as a platform where both teams continued showing off their powers in local futsal. Presumably this will repeat itself in next Tuesday’s Knock Out semifinal, at 8.00pm.
The first ball found the net after four minutes of play by Valletta’s Melvin Borg. Four minutes later Luxol’s international Romanian player Emil Raducu responded back and equalised the result. At the last nine minutes and forty nine seconds of the first half, Rodrigo Ticz Patricio managed to put Valletta back on the advantage. This was balanced again exactly one minute after through Glenn Bonello who had one of the best performances. Thus both teams ended the first half on an equal score of 2-2.
The second half, in terms of rythm was merely a continuation of the first. Top scorer Raphael Felipe Ortiz de Oliveira scored his 75th goal of the season and put Valletta again on top. They remained so for another ten minutes until Luxol’s Brazilian player Celino Alves balanced the matters. This moment seemed to increase Luxol’s initiative and led them to widen the gap between them and Valletta in quite a short time through Mark Zammit and Dejan Bizjak. Remaining passive was surely not the response of Valletta, and they responded back with another goal through Rodrigo Ticz Patricio. Despite the fact that only a minute was left until the game was over, more goals followed. Mark Zammit scored his second personal goal for Luxol while Valletta benefited from an autogoal by Raducu. The last and final move of the game emerged in the last seven seconds from Glenn Bonello who sealed the victory for Luxol which made them Elite Champions.
Presentation of medals to both teams from the MFA President Norman Darmanin Demajo, the Vice President Dr Matthew Paris, FMA’s treasurer Mireille Vella and Farsons representatives followed. Then the cup was presented to Luxol’s captain Mark Zammit who lifted it up amongst celebrations of joy. Thus Luxol secured their place as the Maltese team which will participate in the premilinary round of the UEFA Futsal Cup.