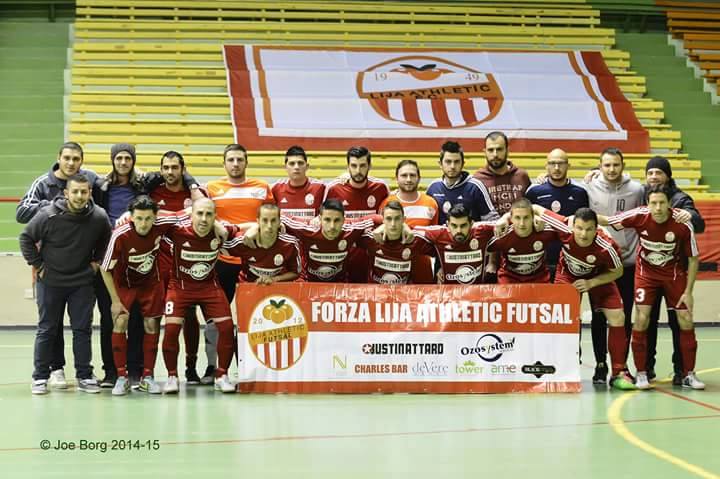 A hat-trick by Peter Mark Cachia, Andre Cutajar and Jean Paul Abdilla were on target for Birzebbugia.

The Athletics knew victory over B’Bugia would send them up and after producing a great attacking display they were worthy winners.
Just one year ago, Lija were still thinking to build up a team to compete again in the local futsal scene .

Now, thanks to significant acquisitions of well known futsal players, Lija have been able to build a team that is now back in the Premier Division.

This season’s campaign has been built on the great scoring spree of striker Aleksandar Ribic, who turned out to be Lija’s inspirational player to push forward their promotion bid.

Nicola del Re’s boys produce an impressive run during this year, dropping only three points, having suffered only one defeat. They deserved this promotion having been one of the most consistent teams in this division.

For Nicola del Re this was a special season as he was debuting as a coach to clinch promotion in his very first attempt.

This website contacted Del Re who seemed elated after this promotion.

“We started building this team bit by bit and assessed the best possible options how to strengthen the squad.”

“The Lija committee had persuaded Mark Zammit and I to form part of the coaching sector. We accepted with great pleasure this opportunity.”

“This team turned out to be a great a family, there is a mix of new and experienced players that help each other to gain success. ”

Dedication and discipline were two keys factors for Lija’s success. However Del Re wants concentration from his players to end this campaign on a positive note.

“Our main objective is to be promoted as First Division champions. We will do our best so that we could continue dreaming.”