Lija Athletics were officially declared as First Division champions as they found no difficulty to see off Mdina Knights 7-0.

It was a bold performance by the Athletics who dominated the match from start to finish with Mdina trying to halt their opponents’ fury as keeper Matthew Gatt was kept busy with some great saves.

Ryan Bugeja, Floren Manea and Nicola del Re pushed their team forward before the break as a brace by Jason Gauci, Mark Mizzi and Aleksandar Ribic completed the score for Lija.

This was a sensational season for futsal newcomers Lija who had a tough challenge from the other promoted team Mellieħa for the final championship.

This season’s campaign has been built on the great scoring spree of striker Aleksandar Ribic, who turned out to be Lija’s inspirational player to push forward their championship bid.

Nicola del Re’s boys produce an impressive run during this year, dropping only three points, having suffered only one defeat. They deserve this success having been one of the most consistent teams in this division.

For Nicola del Re this was a special season as he was debuting as a coach to clinch promotion in his very first attempt. 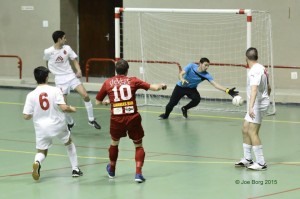 Meanwhile, Msida St Joseph booked a place in the final play-offs after beating Mqabba 10-6 in a thrilling encounter.

Msida played a possession game with the experienced Zvezdan Vukovic and Romanian Marian Gologan an inspiration for Msida.

They marshalled their team’s attacking flair and found the time to score important goals.

On the other hand after breaking the deadlock, Mqabba had to absorb Msida’s fierce reaction in a game where both goalkeepers scored for their respective sides.

Marian Gologan was four times on the mark for the winning side with the other goals coming from Ryan Xuereb, Zvezdan Vukovic, Matthew Dingli, Noel Portelli, Chris Cutajar and Keith Cassar Jackson. 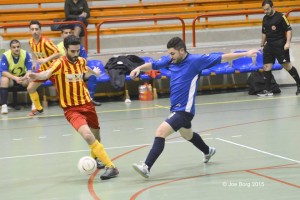 Sirens dominated Siġġiewi 8-1 to climb eighth in the standings.

Robert Darmanin notched a hat-trick, Lawrence Vella and Chris Xuereb netted a brace while Etienne Bonnici completed the rout for the St Paul’s Bay side.

In another match from the lower part of the table, Birzebbugia and Qrendi shared the spoils in a thrilling 4-4 draw that produced numerous scoring opportunities and fine goals.

John Paul Barbara was twice on the mark for the Southsiders while Antonello Brincat and Maxime Landais put their names on the score sheet for Qrendi.