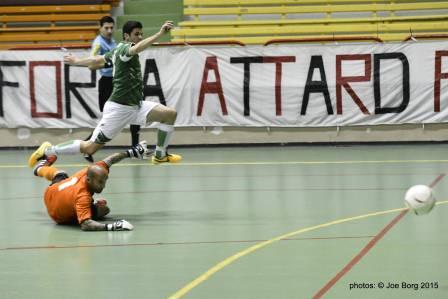 Two goals from Nicola Del Re, together with Aleksander Ribic, Zeljko Anicic, Jean Bert Gatt and Mark Mizzi were enough for the Athletics to get what it takes for their sole leadership in the First Division.

Even though Sirens had a tough game against Lija, their positive attitude made them look forward and resulted positively in their next encounter with Luqa.

Sirens performed with flying colours; with braces from Etienne Bonnici and Jason Camilleri together with goals from Antoine Galea, Jonathan Sammut and Leonard Zammit.

Luqa had already another defeat this week against Mellieha who returned with Daniel Saliba’s goal and braces from Nikolay Filipov and Radoslav Kovachev.

Luqa’s only goal in this match was scored by Carl Grech.

Mdina Knights continued their positive trail, obtaining their second win for this season against B’Bugia.

Andrea Cutajar’s brace and goals from Anthero Agius and Peter Mark Cachia reduced the score for the Southeners.

This quite balanced encounter between Mqabba and Naxxar ended in a 3-2 win for the Lions.

The score for Mqabba was opened in the very first minute of the game by Mark Spiteri, ex-Naxxar player.

The draw obtained by Roderick Attard after 11 minutes of play, was made 2-1 by Paul Bugeja three minutes later for Naxxar Lions.

After the break both teams lacked initiatives such that the second half was meant to be a status quo.

It was in the 26th minute that Mark Spiteri made his personal brace, while Ryan Mifsud managed to score the winning goal in the 38th minute.

It was a thrilling game between Qrendi and Attard with the end result being determined in the final minutes of the game.

Initially Attard showed themselves as favourites with Gerry Christopher Fabbro, Clayton Farrugia, Matthew Buttigieg and Byron Fenech scored for Attard. However in the second half, Qrendi did a good come back and came out as winners, with Antonello Brincat’s brace, Alan Zammit, Bertram Azzopardi and Clayton Borg who scored for Qrendi.

Msida are heading for the playoffs with another great result, this time against Siggiewi.

Siggiewi are passing through a negative period as they didn’t manage to win this year.

Msida’s wide scorers’ list was made up of Marian Gologan’s poker, braces from Zvezdan Vukovic, Chris Cutajar and Herbert Spiteri and another goal by Noel Portelli.

A brace from James Borg and goals from Glenn Gauci and Philip Caruana turner reduced the score for Siggiewi.