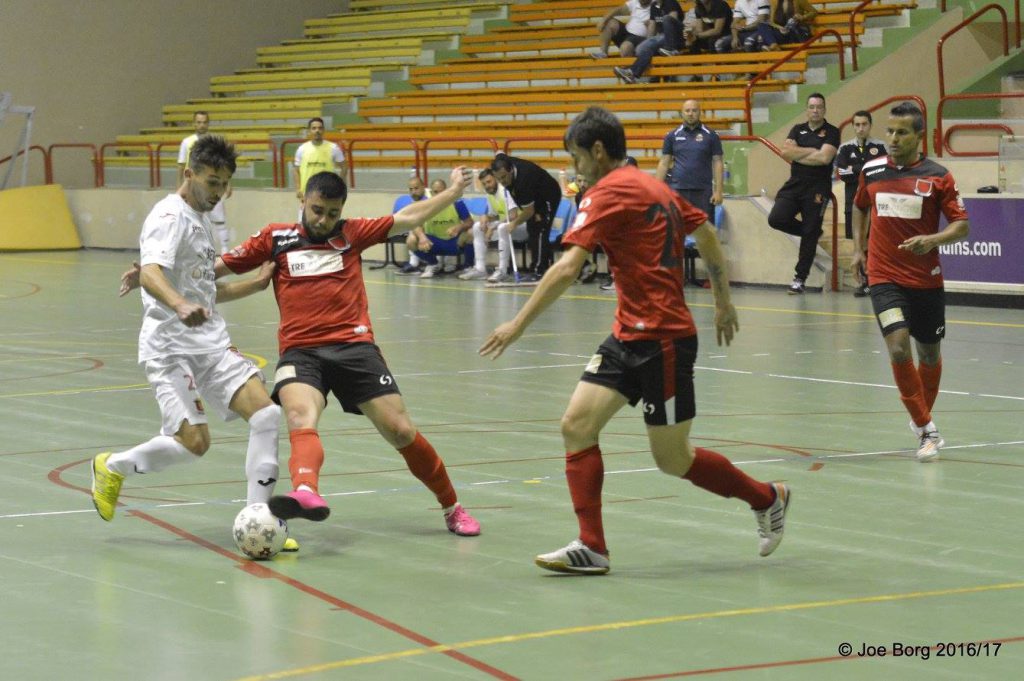 ROBERT BUSUTTIL
Hamrun Tre Angeli head into tonight’s Gatorade Elite Play-offs semifinal second leg (kick-off 20.00) needing to reverse a 6-2 deficit against Valletta to progress to the final.
As Hamrun’s experienced keeper Matthew Mifsud said, the team must pull up their socks and show more cohesion and precision to produce a remarkable comeback.
Despite all this, Mifsud admitted that the group was a bit disappointed but still hopeful.
“Although we knew before the first leg that we were the underdogs of this tie, naturally we hoped for a better result.”
“Despite all this, the team is upbeat and positive. We are a small but united team and despite the many setbacks due to injuries, we have always trained hard to achieve and are still confident as ever of our own capabilities.”
On the other hand, Stefan Vella, the Valletta custodian, is certain Hamrun will adopt an offensive plan.
“We’re expecting Hamrun to attack as from the very first second. We have prepared for this eventuality and all the players are psychologically prepared for this match. We believe that we can do it.”
As regards to the atmosphere in the Valletta clan, Vella confirms the unity of the team.
“The atmosphere between us is stronger than ever. We are all in it to win and book a place in the final.”
The former Lija keeper is excited about the prospect of his first ever final in his career.
“I’m really looking forward as this would be my first final in the play-offs.”
On the other hand, Luxol head into their second leg play-off final clash against Swieqi tonight (kick-off 21.30 hrs) in high spirits after a 10-1 mauling over their same opponents on Friday.
The St Andrews side will take to the court at the Corradino Pavillion eager to record a second consecutive win to clinch the title for the second time since FMA took charge of the organization of the local futsal scene as well as participate for the second time in the UEFA Futsal Cup.
While Luxol go into the game on a high following their first leg big victory, Swieqi know that they have a mammoth task to overturn this deficit and are facing this encounter without any particular pressure eager to show off a better performance from the last match as coach Nikola Farrugia explained.
“We are approaching the second leg as we did for the other matches, with determination and play our style of futsal.”
“Although we lost the first leg, we are going for the second match to put in a better performance. Throughout the season, we showed what we can do and we will give our hundred per cent no matter what.”
Farrugia is overwhelmed by what Swieqi have done so far.
“Boicho (Marev) and I are very happy with this year’s performance. Even the defeat against Luxol in the play-offs didn’t dampen our year.”
“We had two targets; firstly to reach the Elite round and then qualify for the play-offs. We reached our target and now we will resume our progress by learning from our mistakes.”
Despite their massive advantage, Luxol’s Andy Mangion seemed cautious in his approach.
“It’s true we have earned a good advantage from the first leg, but that doesn’t mean we should underestimate our opponents. We will get into the match with respect towards Swieqi while at the same time trying to manage our advantage keeping in mind that we need to be physically and mentally prepared for the eventual final.”
In these double headers, the team with the best aggregate result will qualify for the final. If at the end of the second leg, the match ends in a draw, extra-time will be played following which penalties will decide the winner of the contest.