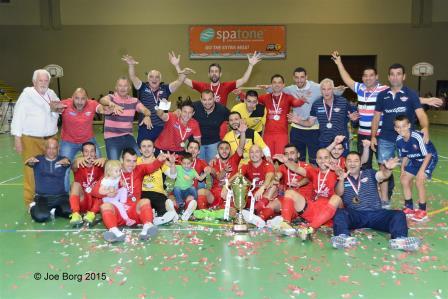 Another futsal season comes to an end, after seeing Balzan winning the Gatorade Knock Out Competition in the final against Luxol.

After the first minute Balzan started positvely when Boicho Marev broke the deadlock.

Luxol finished the first half with two goals ahead scored by George Frendo and Peter Pullicino.

In the second half, Balzan were more organized and after 40 seconds Marev scored Balzan’s second goal.

In the fourth minute of the second half, Peter Pullicino netted his personal second goal and increased the lead for Luxol.

This made way for the Croatian player coach Frane Despotovic to score Balzan’s winning goal, only nine seconds from the end.

After the end of the match, referees and both teams’ players were given the commemorative medals, followed by the presentation of the cup from FMA’s President Mark Borg to Balzan’s captain Carlo Scicluna.