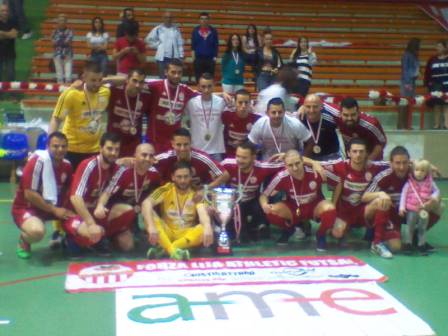 Lija’s final ambition was reached when the new Gatorade Futsal First Division League champions dominated Mqabba 6-0 in their last match, on a day that was reserved for their celebrations.

It was a great performance by Del Re’s boys as they found the vital goals in the most important moments of the match.

Mqabba tried their best to give a challenge to the newly crowned champions but nothing could stop Lija celebrating their first league title which was always on the cards.

Lija were truly this season’s real deal as they sealed the championship four matches before the end of the campaign with their arch-rivals Mellieħa, who also got promoted, giving a tough competition for the title.

Lija were by far the most consistent team in the First Division League, with one defeat in 22 matches, winning an impressive 21 of them. They boast of the most prolific attack, having scored 156 goals and had the meanest defence which was beaten only 46 times.

Debutant coach Nicola del Re, who joined last summer, has brought discipline and harmony in the side . Moreover one could see the overall excellent atmosphere in the squad, also thanks to all the committee, was a key to Lija’s success.

The celebrations had started one hour before kick-off with the loud and colourful Lija supporters filling one part of the Corradino Pavillion stands, chanting and making merry in their own unique way.

Lija were in front before having even put a shot at goal towards the first minute. From a corner, Aleksandar Ribic hit home a first timer that left Clint Mifsud no chance.

Mqabba’s immediate response came from shots by Consoli, Rodo and Dimech which keeper Bernard Camilleri tipped over the bar.

Despite all this, Lija doubled the score through Aleksandar Ribic after a one-two combination with Nicola del Re.

On 15 minutes, Aleksandar Ribic scored his personal third goal after taking advantage on a rebound to put the ball inside the net.

Before the break, Etienne Rodo (Mqabba) and Ryan Bugeja (Lija) were sent off.

In the second half, the plan of the match didn’t change so much as Lija continued to dominate and player/coach Nicola del Re profiting from a goalkeeper’s blunder to slot into the empty net and make it 4-0 for his side.

Ribic found his personal poker as he concluded a fine action to put the ball inside the net.

Substitute Larkin Saffrett joined in for the celebration as he scored his side’s final goal two minutes from the end.

The afternoon’s climax was reached when the new champions were presented with the winners’ trophy from FMA vice- president Alfred Camilleri,  for them to savour a much deserved success.