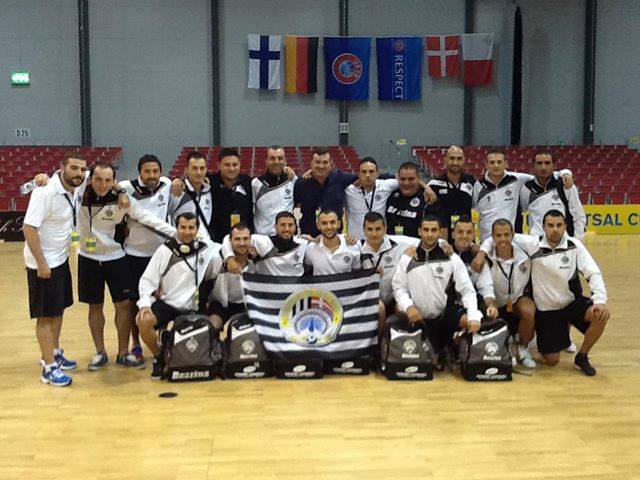 Hibernians Futsal club have just returned from Finland after participating for their first time ever in the UEFA Futsal Cup.They placed second in the preliminary round of Group G after claiming a win and a draw losing only to Hamburg Panthers. This mini-tournament took place in the city of Tampere and was a showcase of brilliant futsal techniques and skills.

In the first match Hibernians lost against eventual group winners Hamburg Panthers 7-2 although having a positive first half. However in the second half the German side scored five goals and this made life difficult for the Paolites.

However in the second match Hibernians drew 2-2 against the Finnish side Ilves. Two goals by Boycho Marev turned the results in favour of the Maltese side but at the end of the match Ilves got the goal that earned them a point.

The Paolites made history in the last match becoming the first ever Maltese futsal club to win a competitive match overseas. Their opponents were Danish side JB Gentofte who suffered a 3-2 defeat. The goals that mattered were scored by Boycho Marev, Giorgi Gerasimov and David Bobokhidze. After the match there were a lot of celebrations by the Maltese group that made history far from our shores.

On their arrival back to Malta, we took the comments of Xavier Saliba and Boycho Marev who were overwhelmed and proud of this success.

“This is an unforgettable moment! For most of us this was our first experience in this tournament and we made history for Malta! We trained hard, six times a week, one week of them twice daily to achieve this goal. This is an exciting time for the Maltese Futsal.” Xavier Saliba, Hibernians player.

“We competed in the UEFA Futsal Cup for the first time. We obtained some good results more than we had expected. Hibs had the chance to be first in the group but coupled with some small mistakes there were some bad decisions from the referee especially in the first game that had to decide our group.
We played as a team. I scored some important goals but no one can score if he is alone on the pitch so I believe in our collective effort. Our coach made an emphasis on set pieces and his tactics gave the desired results.
Everything was very well organized and thanks to our president Duncan Borg and all the staff that really worked hard for this positive adventure. “Boycho Marev, Hibernians leading scorer.