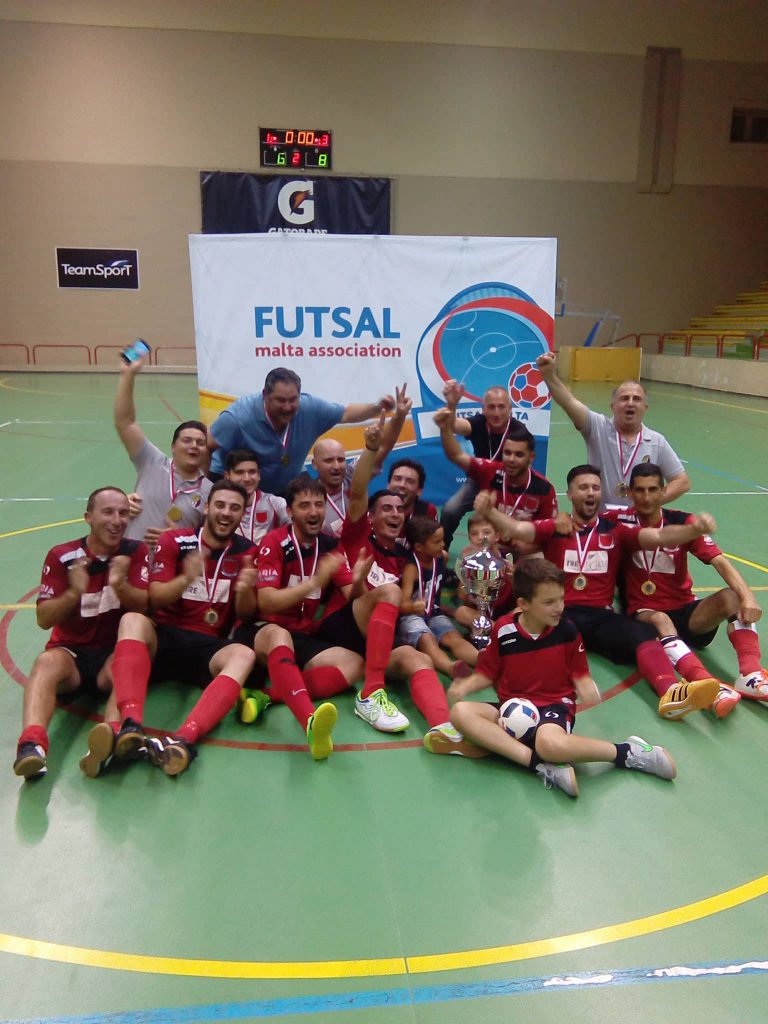 ROBERT BUSUTTIL
Hamrun Tre Angeli beat arch rivals Valletta 8-6 this evening to win the Gatorade KO competition.
It was indeed a memorable evening for Hamrun and their supporters as they not only landed their first trophy since the FMA took charge of the local futsal competitions but they did it at the expense of their sporting foes who were searching for the first honour of the season.
The match was an exciting affair with Valletta squandering their lead as the Reds fought back to level matters in the second half before scoring the crucial goals to make sure of grabbing the cup.
It was a bitter pill to swallow for Valletta as they displayed some positive futsal and could have easily scored more goals had it not been for a couple of superb saves by Ħamrun goalkeeper Matthew Mifsud at the start of the second half.
Futsal international referee Franco Cachia was officiating his last game and prior to kick-off he was presented with a memento by the FMA officials.
Valletta began confidently and surged ahead on 5 minutes when Raphinha’s grounder beat Mifsud to make it 1-0.
The Spartans keeper, who was playing his last official match, performed a string of consecutive saves on Raphinha, Milijic and Di Maio.
But on the stroke of 13 minutes he could do nothing as Jovica Milijic hammered home to double the score for the Citizens.
Hamrun seemed confused and it was no surprise that they succumbed to Valletta’s third goal one minute later courtesy of Denis Di Maio who slotted in from close range.
After calling a time-out, Hamrun managed to reduce the score as Luke Stivala took advantage of a defensive blunder to make it 3-1.
Valletta maintained their positive attitude and scored their fourth goal after Hamrun’s Daniele Degennaro scored an own goal.
Two minutes from the end of the first half, the Reds scored twice through Degennaro and Luke Stivala to make a 4-3 scoreline before the interval.
Hamrun now drove forward with renewed vigour as they intensified their offensive runs to try to upset the Valletta rearguard.
In no time they drew level when Jason Mifsud was at the right time and place to put the ball behind Stefan Vella.
Five minutes later Hamrun went ahead when Degennaro tapped in a Florin Anton pass to make it 5-4.
The Lilywhites maintained their composure and hit the target twice through Milijic and Aguilera Puerto to turn the result into their favour.
Despite this setback, Hamrun continued to attack and immediately Degennaro and Peter Pullicino turned the tables for their team.
With two minutes left, Clayton Felice, the Citizens’ mentor opted for the flying keeper , to instill more pressure on Hamrun’s defensive department.
But in so doing they left their goal unattended and Reds’ keeper Matthew Mifsud took advantage as he applied the killer touch in the dying seconds of the match to seal the issue for his team.
At the end of the contest, Mireille Vella, an FMA officiaL, presented the Gatorade KO cup to Jason Mifsud , the captain of Hamrun.