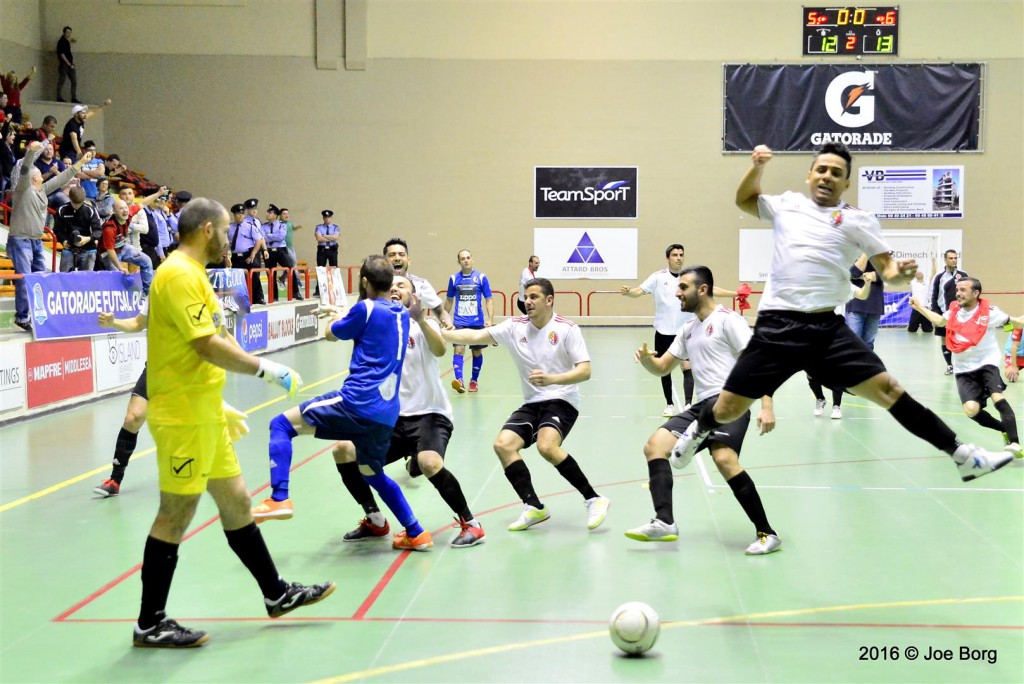 Hamrun Spartans drew first blood against Valletta with a 13-12 win in the first leg of the Gatorade Elite Group Final. It was a thrilling 6-6 draw who led both teams for the penalty shootout.
Valletta’s Dejan Bizjak broke the deadlock early in the match and paved way to an exciting match which pleased all the spectators present in Corradino Sport Pavillion last Friday night.
Brasilian Madson Gaetano De Abreu balanced matters and minutes later Michel Melo Jose put the Spartans on the lead. Raphael Felipe Ortiz de Oliveira (Raphinha), made it 3-1 after receiving a fine ball from Peter Pullicino.
Valletta returned with Xavier Saliba’s powershot which gave little chance to Hamrun’s goalkeeper Brian Baldacchino. Raphinha scored again just before half time.
In the opening of the second half, Cristian Cuadros Silva scored for Valletta and a minute later his team mate Dejan Bizjak rebalanced the score. Definitely this was not the end neither for Hamrun Spartans nor for Raphinha, who brought again his team on the lead.
The last minutes of the game were risky for Valletta, as their captain Xavier Saliba was sent off for misbehaviour. In fact, a minute later Andy Mangion scored the sixth goal for Hamrun Spartans.
Against all odds Valletta created a dramatic comeback as Dejan Bizjak and Dylan Musu, with the latter playing as flying keeper, levelled the score to 6-6. The last goal came only ten seconds to the end of the match, which had to be decided on penalties.
Rodrigo Ticz Patricio, De Abreu, Raphinha, Melo Jose, George Frendo, Andy Mangion and Daniel Mifsud netted for Hamrun Spartans.
On the other hand Cristian Cuadros Silvo, Dejan Bizjak, Jovica Milijic, Dylan Musu, Mohammed Elamari and Melvin Borg scored for the Citizens. The save of Daniel Brincat’s penalty shot by the goalkeeper was the end for this exciting first leg, and a win to Hamrun.