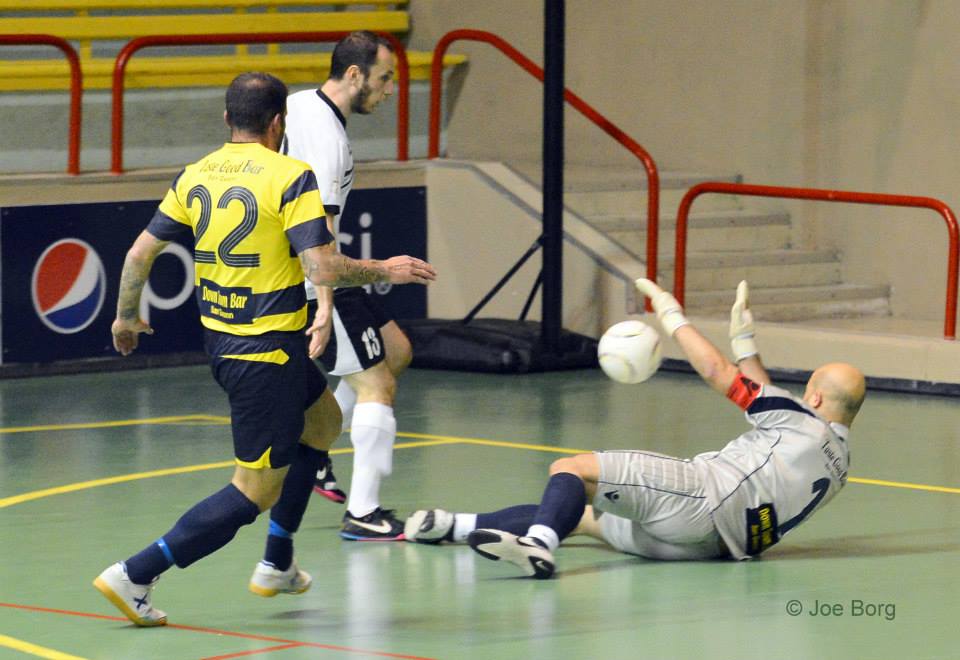 The second semifinal of the FXDD Premier Division play-off was marred by deplorable incidents as the clash between Hibernians and San Gwann had to be suspended 33 seconds from the end.

The chaos started after referee David Balzan sent off a San Gwann player for the second yellow card. This sparkled vehement protests by the San Gwann clan. Amid the protests, some supporters jumped in and total chaos erupted. A few moments later, the match was suspended.

At that particular moment, San Gwann managed to level matters in the aggregate score in a match which got into extra-time.

An exciting match indeed which saw mighty San Gwann giving their utmost to put Hibernians in difficulty and getting the share of play.

However San Gwann keeper Matthew Mifsud was superb to say the least. He produced a string of exceptional saves that kept his team in contention.

A match that had a electrifying start as San Gwann surged ahead thanks to a Dylan Musu‘s freekick who slotted the ball home and make it 1-0.

Hibernians didn’t expect such a shocking start from their opponents. They tried immediately  to surge forward being two goals down in the aggregate score.

They replied from Celino Alves on 2 minutes but his shot was ably saved by keeper Mifsud.

When the clock struck the ninth minute, Hibernians were back on level terms as Melvin Borg found the net from close range.

The San Gwann custodian was now beginning his busy day as he successfully repelled shots by Bobokhidze, Cohen and Saliba.

However he could do nothing four minutes later when Hibernians scored two consecutive goals by David Bobokhidze and Celino Alves after some defensive blunders.

But San Gwann never gave up and quickly restored parity by replying with a double by Dylan Musu and Denis di Maio who dribbled past the goalkeeper and  slotted home to make it 3-3 before half-time.

One minute into the second  half and Hibernians were unlucky to hit the post after a Celino Alves personal move.

Di Maio, the San Gwann striker had his shot well saved by Cassar.

On 24 minutes, Celino Alves underlined his excellent futsal skills when after dribbling past two players, he dashed a fierce shot that gave no chance to Mifsud to make it 4-3

The match continued with its high tempo and on 30 minutes Dylan Musu had his shot saved by Cassar.

One minute later, Andrew Cohen missed a great opportunity when he hit high after receiving from Saliba.

The Paolites continued to exert pressure on the San Gwann rearguard and keeper Matthew Mifsud continued with his excellent saves to keep his team into the match.

The score being 8-8 aggregate had to go to extra-time.

Hibernians wanted the winning goal at all costs but the San Gwann custodian continued with his  brilliant form to deny  his opponents.

On 48 minutes, Hibernians scored their fifth goal thanks to Celino Alves who scored another gem of a goal to the joy of his  supporters.

But 33 seconds from the end, San Gwann substitute Nizar Fawzi Salem Abouisha scored directly from a corner after hitting the ball past keeper Cassar.

The goal brought a lot of joy amongst the San Gwann clan but immediately after the referee showed a red card to a San Gwann player after being shown the second yellow card.

From here a lot of protests erupted and the match was eventually suspended.