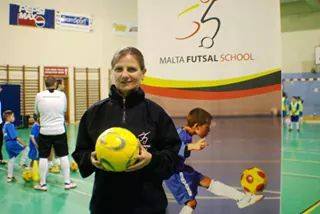 Coppola will be helping the Malta Futsal School to accomplish a future objective, that of promoting Futsal among girls.

Maria Coppola, 39, has been involved in football for over 25 years.  She played with various female football teams such as Lija, Hamrun, Melita, Mġarr and abroad in France and USA.

She is now focusing on coaching and works as a TV sports presenter.

Maria Coppola’s aim to help promote Futsal with girls has also caught the eye of the Futsal Malta Association. In fact she has been approached to help the association in creating a female futsal league. Maria has launched a 5-a-side event last Saturday at the Pieta’ Hotspurs club house during which the girls were briefed with the basics of the game.

This website has contacted Maria Coppola who willingly wished to share with us her idea regarding this initiative.

How did your idea of girls playing Futsal flourish?

Futsal in Malta is growing and becoming more popular. I came up with this idea as women are capable of playing futsal just like men. I think that a 5 v 5 match with unlimited substitutions is an ideal setting for female players.
It is a proven fact that futsal can help players to develop their skills and quick thinking.
Talk about the event that you organized a few days ago.
I think that the event was a complete success. There was a good response from the girls and the association was impressed with their interest during the meeting. We managed to divide the girls into four teams and created a mini tournament.
The fact that I’ve seen the girls happy and satisfied after this event has encouraged me to push forward this idea.
Talk about the cooperation you have found from the FMA.
Futsal Malta Association President Mark Borg and Vice president Alfred Camilleri gave me a warm welcome to be part of the futsal family. In fact they have approached me to encourage girls to play this beautiful game. Now we are working together to make this dream come true.
What are you planning to organize in the coming weeks?
We are planning to set up a friendly tournament to keep them in contact with the game. The FMA president Mark Borg has  proposed me to organize an exhibition match before the Knock Out final in April.
What were the comments made by girls during this event?
Well they just want to play futsal and participate in their own futsal league.
What is your main objective now?
My main objective is to set up a local futsal league for women as from September 2015. With the continuous cooperation that I’m finding from the FMA, I think that we are on the right track.