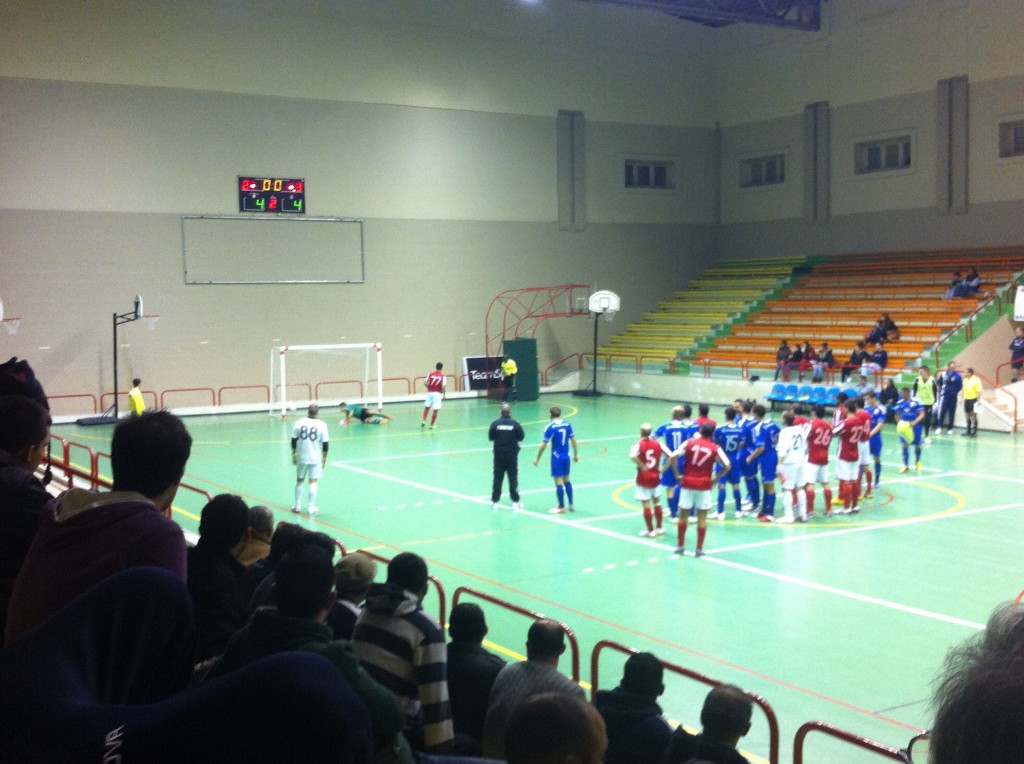 The FXDD Futsal KO semi-finalists emerged this week after a harshly contested quarter final round.  Balzan FC snatched an 8-7 victory after a penalty shootout against Lija Athletics, with the final result after 40minutes playing time ending 4-4.  Lija were undoubtedly a better side than last week’s league encounter against the same Balzan, whilst the latter had Player coach Florin Anton, Cosmin Anton and Glenn Bonello missing. Balzan had futsal veteran Zeljko Ancic returning on the pitch after a long stretch serving as assistant coach to Anton. Until halftime, the game was balanced, with Lija leading one up, but early in the second half, Lija picked up momentum and inflicted a further  three goals to Balzan, with captain Jovica Milijic clearly distinguishing himself.  Lija’s goalie Tano Mallia was also in outstanding mood. With 4 minutes of playing time remaining, and with the score 4-1 in Lija’s favour, Balzan showed their true character and scored one goal after the other to level the score 4-4, with Alexander Ribic scoring the equalizer. Balzan also had Carlos Scicluna sent off after a direct red card, whilst Noel Bray was sent off for Lija after a second yellow card in the final 4-minute drama. Balzan FC had the best out of the penalty shootout. Game ended 8-7.

In another entertaining quarter final played on Tuesday night, Hamrun Spartans overcame a stern test against Second Division side Pembroke.  The latter are also still unbeaten in the FXDD Futsal Second Division League after 8 matches and seem well poised to join the First Division group next year. The game was well balanced throughout and Pembroke also had their good moments in advantage and missed so many chances in front of goal but the experience of Massimo Grima and Gianluca Calabretta for Hamrun, who are also key regular players in the MFA Premier Football League, earned Hamrun a precious pass to the semi-finals with game ending 7-6.

Floriana were the third team to pass to the semi-finals stage although they were missing some key players, overcoming First Division side Qormi FC, 11-5. Qormi are also fighting for promotion to the FXDD Futsal Premier Division, and are currently second placed behind St. Patrick, with equal points to San Gwann.  Floriana returned to winning ways, after a streak of negative results in the FXDD Premier League with captain Kurt Bartolo proving outstanding for his side. Floriana were already 3-0 up in the first four minutes of the game and from then there was no turning back.

In the last game of the quarter final round, it was Hibernians who joined the semifinalists after a tough encounter against neighbours Tarxien Rainbows.  In this keenly contested derby, Tarxien continued to impress playing high quality Futsal. On the other hand, Hibernians, who are passing through a good patch and who are also, like Balzan FC, still unbeaten in the league, possess a compact resilient side which is difficult to beat.  When the result was 4-3 for Hibernians with 12 minutes still on the clock, Tarxien made use of the flying keeper, but this time it was not effective as it was in previous games, and in fact Tarxien conceded a further two goals. Tarxien scored a superb goal by Gabriel Dobre in the final minutes to make the score 6-4.

The FXDD Futsal Knock Out Semifinals between Balzan v Hamrun and Floriana v Hibernians will be played on the 22nd March 2013  whilst the respective FXDD Futsal Divisions will proceed on 15th January 2013 after a short break for the Christmas festivities and for National Futsal Team commitments. In the meantime FMA would like to wish you all the very best.