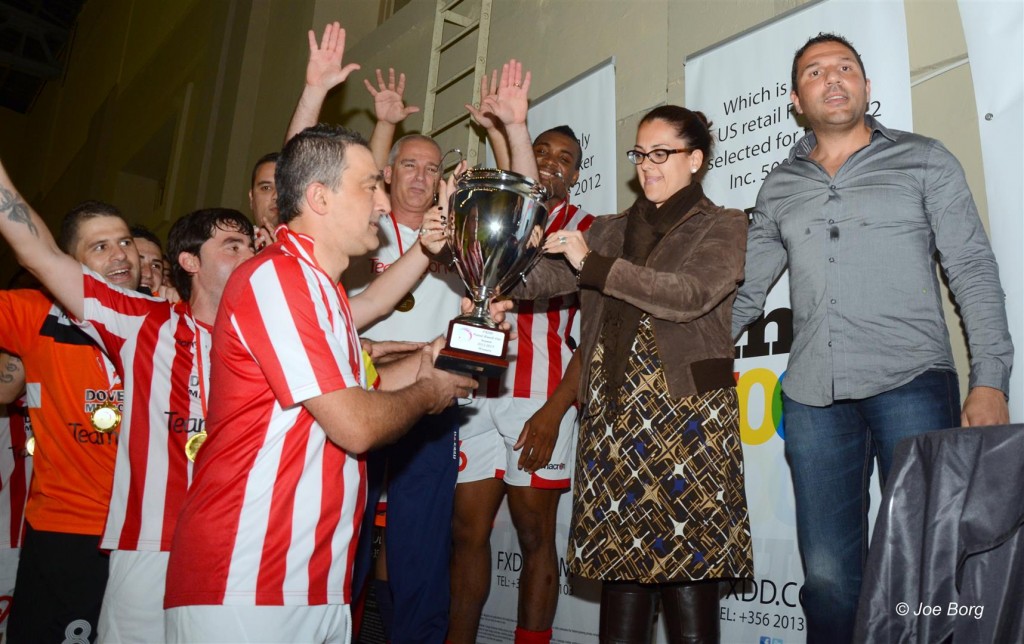 Balzan FC snatched their second honour this season after claiming the FXDD Futsal KO Cup organized for the first time by the Futsal Malta Association in a hard fought win against Hibernians, 6 – 3. Balzan had opened the FMA season last September winning the FXDD Futsal Super Cup against Lija Athletics.

In front of a record crowd which packed the Corradino Pavilion last Friday night, it was clearly evident from the initial stages of the game that this was going to be a thrilling balanced encounter with each side controlling the opponents well in the first half.  Balzan FC opened the score in the 17th minute through Basil Emeka but Hibernians managed to level the score just 4 seconds before the half time through Cedric Sciberras.

In the second half, although the game remained fairly balanced, but both teams immediately pushed more to go into the lead. In the 21st minute, Balzan were again in the lead through a well taken free kick by Florin Anton. Hibernians determination once again led them to level this score through Boicho Marev. Balzan’s Nicola del Re was sent off for his second yellow card after a reckless tackle.  Glenn Bonello put Balzan back in the lead in the 30th minute, whilst Basil Emeka added another one making it 4 – 2 for Balzan, with three minutes to go.

The game ignited as Hibernians pulled one back once again through Cedric Sciberras, as Balzan players protested for foul play on their goalkeeper Rueben Grech. Few seconds after, Balzan were awarded a controversial penalty, which was converted by Glenn Bonello making the score 5 – 3. In the dying seconds of the game, Balzan sealed their KO victory with another beautiful goal once again from Florin Anton. The final whistle, sent the Balzan clan in euphoric mood.  Balzan FC captain, Christian Micallef was presented with the FXDD KO Trophy from Ms. Fiona Soler, FXDD General Manager and Mr. Donald Spiteri, FMA President.

More photos can be found in the gallery section on this website https://fma.com.mt/photos/