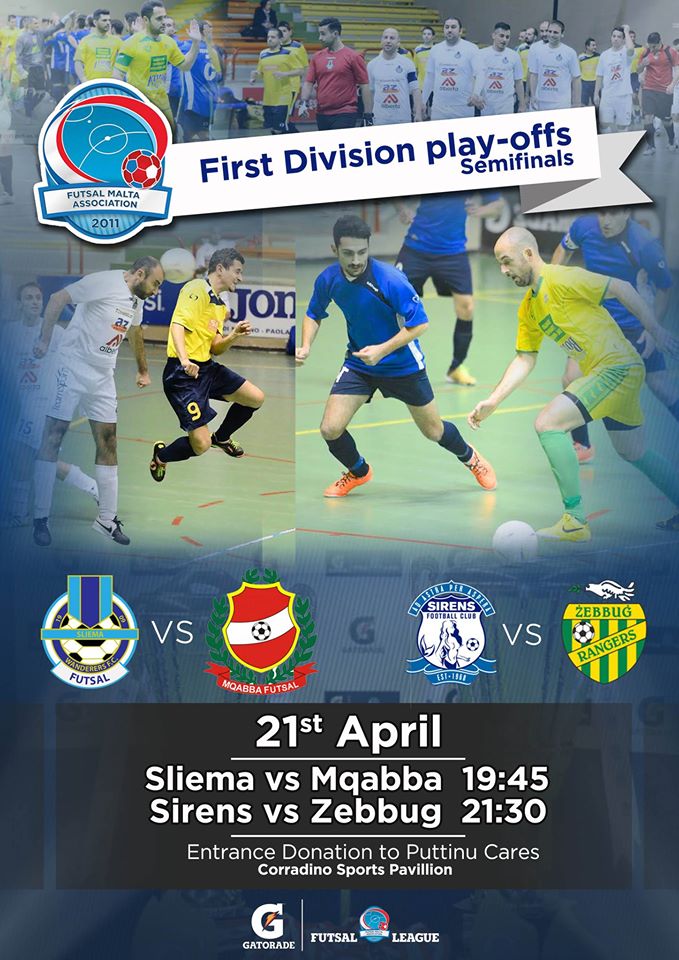 The quest for championship glory resumes tonight when four teams will be bidding to reach the final of this season’s Gatorade First Division play-off.
In the first match leaders Sliema meet fourth placed Mqabba (kick-off 19.45) while Zebbug Rangers will be looking to produce another good performance as they take on Sirens (kick-off 21.30).
On paper, the most enticing tie should be that between Sirens and Zebbug as both teams are determined to make progress in this competition and clinch a place in the final.
The two teams are very balanced with Sirens sitting one place above Zebbug in the standings. However, the latter have a perfect record against the St Paul’s Bay outfit this season after winning both league encounters 5-3 and 3-1.
Therefore the Rangers will fancy their chances of progressing to the final as they rely on their Spanish trio, Inigo Dolara, Anton Novoa Perez and Alejandro Rubia Morenas.
On the part, Sirens have endured a positive spell in the Gatorade First Division as they hope that their main striker, Ryan Gilmour Cassar find his goal scoring spree.
Sliema Wanderers, who are unbeaten in the second phase of the championship, face Mqabba in the other semi-final.
The Blues are favourites to book their place in the final but Mqabba come into this match on a high after winning their last league encounter to ensure a place in the play-offs.
Sliema have also had a tranquil build-up to the game after their 12-6 win over Gozo last week.
Sliema’s coach Paul Carabott cannot field Josh Parry as he played his last match in Malta last week. But the Wanderers’ mentor can rely on some experienced players that can make a difference such as Aleksandar Ribic and Paul Bugeja.
Meanwhile, Mqabba hope to make the biggest upset in this competition as they try to get into the final.
Kevin Loughborough’s boys have been an inconsistent lot, having prevailed against some more quoted opponents but losing ground in some manageable encounters.
In their previous matches earlier this season, Sliema have seen off Mqabba 11-5 and 5-3.
In these semifinals, if the matches ends in a draw, extra-time will be played following which penalties will decide the winner of the contest