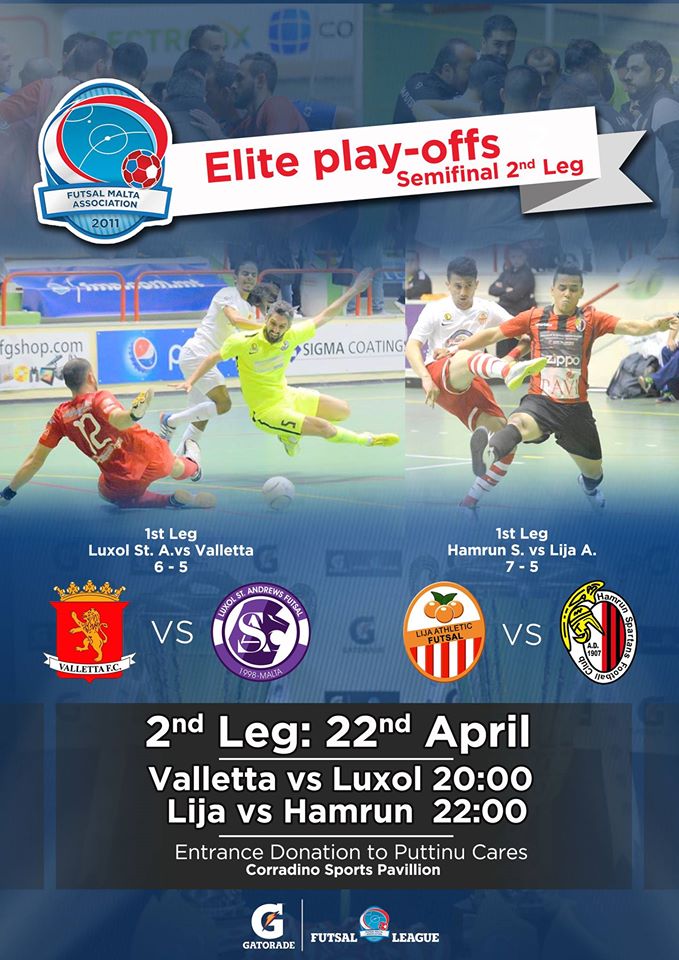 The final line-up of this season’s Gatorade Elite play-offs will be finalised tonight when the two second leg semifinals will be played at the Corradino Pavillion.
Hamrun and Luxol will be looking to maintain their slender advantage obtained in the first leg when they face Lija and Valletta respectively.
On paper, the most enticing tie should be that between Luxol and Valletta as both teams are determined to make progress in these play-offs.
Besides the already said first leg encounter that finished 6-5 for the St Andrews outfit, both teams faced each other three times this season.
In the Super Cup, Luxol defeated Valletta 9-5 while in the league encounters, the Lilywhites humiliated the Champions 7-1 only to lose the Elite Round fixture 4-1.
From what we have seen last week, it will be another intense match which can be decided even at the last gasp of the match.
Valletta, will rely on the form of Slovenian international Dejan Bizjak and some of their experienced players Xavier Saliba, Jovica Milijic and Dylan Musu.
Luxol will be all out to preserve the advantage and hope that their player-coach Frane Despotovic will keep his inspirational form after netting a poker in the first leg.
Meanwhile, Lija have good reason to be upbeat about their chances of advancing to the final after last week’s good performance against Hamrun.
Although they start with a 7-5 advantage, the Spartans are unlikely to underestimate Lija who were a hard nut to crack in their first leg encounter.
Last week, Hamrun missed a lot of golden opportunities in front of goal especially as they failed to capitalize four shots from the second penalty spot.
The Spartans hope that their Brazilian players will make the difference as happened last week when Madson and Raphinha netted a brace.
In these double headers, the team with the best aggregate result will qualify for the final. If at the end of the second leg, the match ends in a draw, extra-time will be played following which penalties will decide the winner of the contest.
Play-off semifinals fixtures:
20.00 hrs – Valletta vs Luxol
22.00 hrs – Lija vs Hamrun