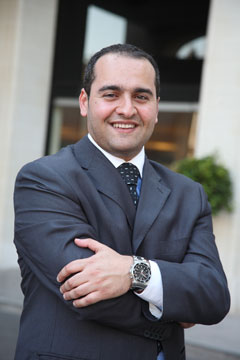 Balzan made their opponents Lexmax Chisinau sweat to gain their opening three points of Group A of the UEFA Futsal Cup 2012. A controversial penalty awarded in the second half of the game paved way to a hard fought match in which the Malta Futsal Champions lost again. But contrary to what we witnessed in the de

but of the competition yesterday, the players came off the pitch at the end of the game with their head up. The Thursday morning debriefing session seems to have left the desired impact as Balzan were much better organised in their set up and tactical play.

They were facing Lexmax Chisinau hot favourites to win this group and advance to the main round of the UEFA Futsal Cup. Florin Anton made no surprise changes bar his keeper’s choice where ex Zurrieq Futsal Reuben Grech was given the green light to deputize in a UEFA competition to replace Xerxen who played the first game. Grech stayed cool and focused in front of a series of attacks and attempts at goal by the Moldavian players especially in the first 20 minutes of the game.

The first five minutes sent out a clear message to player coach Vasile Arlet that the Malta side was not in for another shocking scoreline. Balzan keeper Grech had to block and save several shots at goal by the likes of Lungu, Negara and Baesu amongst others. Balzan responded extremely well with some encouraging exchanges in the half field masterminded by Aleksander Ribic who had a good game along with Scicluna, Anicic and Del Re.

Frustration was being witnessed amongst the Moldova players and on their bench as they could not find their way in to break the deadlock which luckily for Balzan did bot break till the half time talk. Before the end of the first half the Malta Futsal representatives in UEFA a a golden opportunity to go a goal up when Zeljko Anicic missed what seemed an easy tap in on the second post. Earlier Balzan went again close with Del Re and Bonello.

The turning point of the game came some minutes into the second half when Lexmax were awarded a penalty for a hands ball infringement just inside the penalty area as robust Basil Emeka allegedly touched the ball with his hand. Baesu from the penalty spot did not give any chance to Grech who turned to pull the ball back from his net after a powerful shot.

Despite going a goal down Balzan kept cool and tried to maximize damage control with some good possession and some fine moves by Anton, Ribic and Manea.

Two goals in a minute closed the game as Balzan registered a mini black out when conceding the second and third goal by Tunarcov and again by Baesu. Notwithstanding the fact that the game was practically closed the players continued with their game plan and it was only bad luck that they did not manage at least a consolation goal.

In the wrap up minutes Anton awarded some playing time to two dedicated players Christian Micallef and Matthew Cocks who were part of the team but did not play in the first match when Balzan FC Futsal lost 9-1 to Leotar.