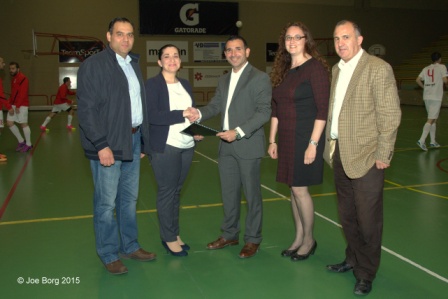 The Futsal Malta Association is proud to announce a new 3-year sponsorship agreement with Gatorade.

Through this sponsorship agreement, Simonds Farsons Cisk plc, the importers of Gatorade, will be branding the National Futsal Competitions organised by the Futsal Association (FMA) through the Gatorade brand.

This will comprise the Premier League, First Division League, Top Scorer and Best Player Awards. The Futsal Championship is based on Final Four play-offs held in May, from which the Futsal Champion emerges, acquiring a prestigious participation status in UEFA Futsal Cup qualifiers in August.

Futsal is an international renowned sport, more commonly known as 5-a-side indoor football, falling under UEFA and FIFA jurisdiction and which has emerged primarily from Brazil, Uruguay and Spain. The style of football played in these countries shows clear signs of the futsal influence on kids. It is a known fact, that most international players such as Neymar, Ronaldinho, Messi and Ronaldo, owe their skills to futsal.

In Malta, the Futsal League has grown in popularity throughout the past three years, when Futsal Malta Association has been entrusted by the Malta Football Association, to organise the futsal competitions and promote the game of futsal locally. During the past years the level of futsal has also improved, attracting a number of top class futsal players from Romania, Bulgaria, Serbia, Spain, Brazil and Albania. In the past 5 years Futsal Clubs competing in UEFA competitions have managed to garner no less than 11 points.

The FMA President, Mark Borg, thanked Simonds Farsons Cisk plc, for their support to Futsal in Malta and expressed his intention to bolster the the promotion of futsal as well as invest in coaching courses thanks to this sponsorship agreement.