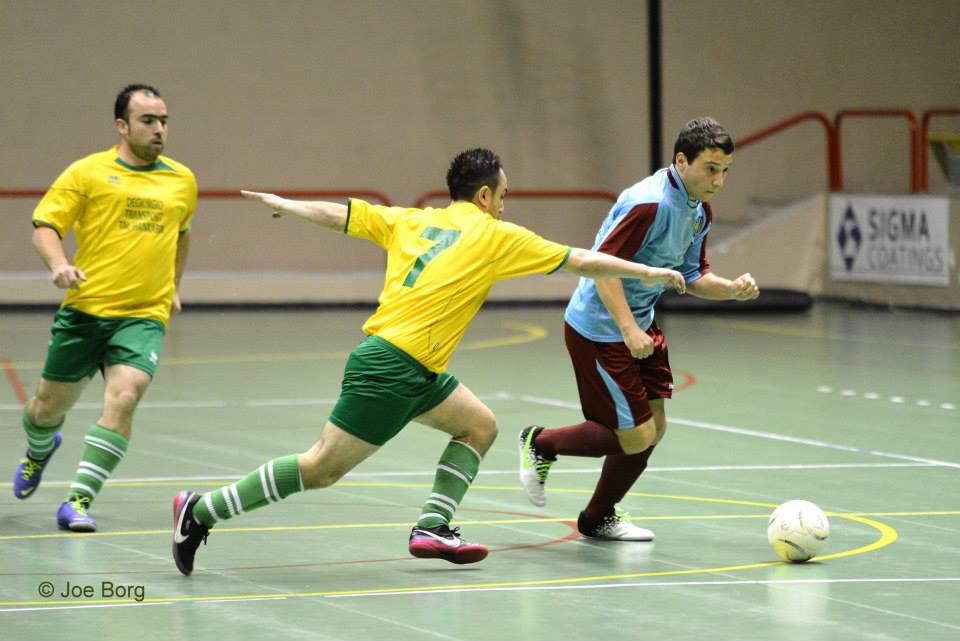 Zebbug looked heading towards another win in the FXDD First Division match yesterday as they lead Gzira by two goals for most of the time.

Gzira however produced a remarkable comeback in the second half, scoring five goals within 12 minutes to turn the tables on their opponents and win an entertaining match that keeps them in the hunt for promotion in the Premier Division.

It was a very exciting game, certainly a good promotion to local futsal, as both teams, in search of promotion into the top flight, gave their all to produce some dramatic moments.

Before the match, both teams showed signs of fair play as they took a group photo together whilst producing a positive message: WE SHOULD ALL PLAY FAIR FUTSAL.

Zebbug surged ahead in the 3rd minute when Karstin Cilia, without any doubt the Rangers’ best player, hit a fierce shot that Camilleri couldn’t save.

Two minutes later, Gzira reacted swiftly and restored parity with a quick shot by Josh Parry that surprised the Zebbug goalkeeper to hit the target.

The game had a really fast pace and Zebbug didn’t take long to go ahead again through Karstin Cilia who dribbled past two players to knock the ball over from close range.

Zebbug continued to dominate during this phase and went close in two occasions through their captain Jamie Portelli.

Paul Carabott Damato, the Gzira mentor, made a tactical change as Italian Alessio Restuccia was put further in the offensive sector alongside Josh Parry.

This move seemed quite wise as Gzira exerted pressure on the Zebbug rearguard who were quite good to absorb their opponents pressure.

As the clock struck the 16th minute, Gzira went close as Ricky Zammit had to clear off the line to avoid a clear goal as he secured a 2-1 advantage for his team before half time.

In the second half, Gzira were hit hard again by Zebbug third goal.

On 23 minutes, Karstin Cilia again find the net for Zebbug to add a personal hat-trick and gain a further advantage for his team.

But just as Zebbug might have thought that they had the match wrapped up, Gzira effected a substitution, sending in Josh Parry, who turned out to be a constant headache for the Zebbug defence as Gzira suddenly jerked into shape.

In the space of one minute, Gzira levelled matters as Alessio Restuccia scored a brace to make it 3-3.

First the Italian striker made a one-two combination with Josh Parry to hit home and then getting a rebound after Zebbug keeper Baldacchino saved temporarily.

Nothing could stop Gzira now as they scored another one on 28 minutes. It was again Josh Parry who took advantage of a defensive blunder to make it 4-3 for his team.

The fifth and sixth goal in the space of 20 seconds were a carbon copy of each other. Restuccia sent twice Josh Parry at goal and for the British player, it was easy to deposit into the net.

Zebbug did make a late reaction as Dillon Bugeja’s shot hit the crossbar.

Gzira controlled the proceedings to gain their twelfth success of the season which puts them temporarily at the top of the table alongside Valletta.