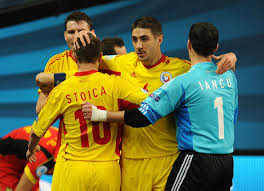 This was the moment when Balzan’s Romanian forward Emil Raducu announced himself to EURO 2014 in Belgium.

In the opening match against hosts Belgium after 3:23 minutes, Raducu, tight on the touchline, skipped past his marker and slipped the ball beyond David Morant, the Red Devils keeper. It was the first goal of the tournament for Romania who eventually won this match 6-1.

It was a collective performance by the Romanians with Raducu voted as the best player of the match.

In the second match Romania lost narrowly against Ukraine 0-1 with Raducu playing another good match.

They qualified for the quarter-finals of this tournament and played against the eventual finalists Russia. This was really a big hurdle for the Romanians as they lost heavily 6-0.

Although being ousted from the tournament, Romania held their heads up high, satisfied that they have given a great performance against Europe’s big heavyweights.

After this experience I decided to meet Emil at the Corradino Pavillion to talk about his  experience in this tournament. We found him sweating really hard during a training session with Balzan.

Raducu, very humble as a person, was frank in his replies.

“It was really a good experience playing against the European heavyweights.As Romanian National Team we were motivated to do well in this tournament. We succeeded to win the first match against the hosts. It was a great start!.”

When asked about his achievement when he was voted the best player of the match, Raducu humbly answered that for him it’s not this honour which is important but the performance of his team.

“I like to speak more collectively rather than personally. I have done my job. I scored and helped my team-mates then we were rewarded for our perseverance.”

Raducu was happy about Romania’s performance in this tournament. After winning the first match against Belgium, He was disappointed to lose narrowly against Ukraine despite playing well.

In the quarter-finals, Raducu admitted that Russia was a difficult hurdle to surpass.

“Russians proved to have more experience than us. They pressed us from the very first seconds and it wasn’t easy for us.”

Despite all this, the coach was happy with his players’ level of play. For all the nation it was a good placing in this prestigious tournament.

When asked about his experience with Balzan, Emil said that he is very happy in this team.

“The squad is really good. The president and all the group take care of us and we try to pay them back with some positive results.”

Balzan’s performance in the FXDD Premier Division is good  after winning all the matches played so far, except the match against Hibs. Although suffering this narrow defeat, Raducu is still hopeful about Balzan’s chances to win the league.

“We always  give our 100%, we are improving game after game  and our fighting spirit will help us to win the league and eventually the KO competition.”

When asked about their potential rivals Hibernians and Luxol, Raducu promptly answered,

” We have to focus on our performance not on what others do. We like to concentrate about our level of play and eventually increase our performance.”