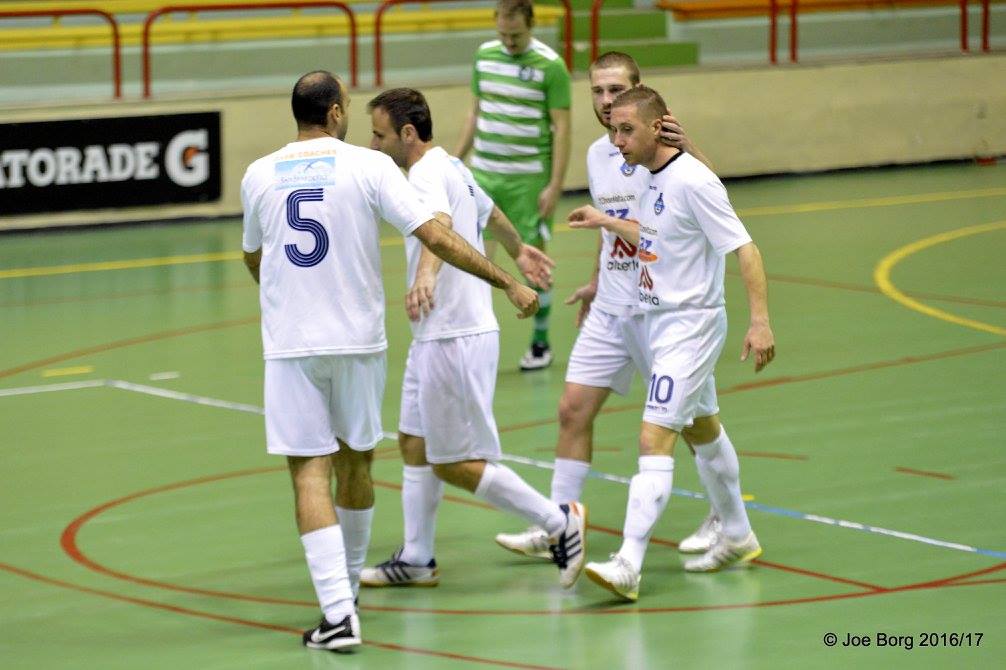 ROBERT BUSUTTIL
One place is still up for grabs in the Elite Gatorade Futsal League with no fewer than four teams still fighting for that spot – Mriehel, Sliema, University of Malta and Msida.
With Luxol, Valletta, Hamrun and Swieqi already guaranteed of a place in the most important round, only four points are separating fifth-placed Sliema and Mriehel from Msida in eighth place.
The remaining spot will be decided in the next two round of matches with Mriehel and Sliema in pole position as they maintained their positive streak after winning their respective encounters.
Sliema managed to overturn a five-goal deficit as they came from behind to beat Qrendi 7-5.
Craig Pickard looked to have wrecked Sliema’s ambitions but a quickfire reaction saw the Wanderers turn the tables to a 7-5 score line before the interval.
In the second half, in came Serbian Uros Markovic who inspired the Wanderers with a sublime performance to ensure his team’s fourth consecutive win in the campaign.
Returning player Paul Bugeja was in fine form for Sliema as he netted five goals while Uros Markovic was three times on the mark.
Leandros Calleja scored a brace while Christian Micallef added another one for the winning team.
Qrendi had Craig Pickard scoring six goals while Antonello Brincat notched a hat-trick.
Mriehel ESS are also in contention for the fifth place after seeing off Safi San Lorenzo 7-2.
Mriehel’s win was deserved even though they had to wait until the second half to ensure of the three precious points.
Safi goalkeeper Christian Lia needed to produce a string of quality saves to keep his team in the match.
However in the second half, he had to surrender in four occasions as Faisal Alnakua was a continuous threat to his team’s rearguard.
Alnakua struck a poker for Mriehel while Ayoub Ahmad, Milad Najem and Marwan Telisi also put their names on the score sheet.
Safi’s consolation goals came from Clive Calleja and Leonard Zammit.
Marsascala Construct Furniture returned to winning ways after an impressive 6-3 win over Swieqi Under 21.
It was clear from the outset that Marsascala were desperate to bounce back from their unexpected defeat to Zurrieq Wolves last week.
Marsascala regained their earlier momentum and extended their lead in the second half to clinch their third victory of the season.
Denzil Pisani was the hero for the Sea Southsiders with a hat-trick, Franklin Abela was twice on target while Dylan Caruana added to their tally.
The youth team from Swieqi, who had a good first half, had Jamie Mangion, Lydon Baldacchino and Dale Vella on the mark.