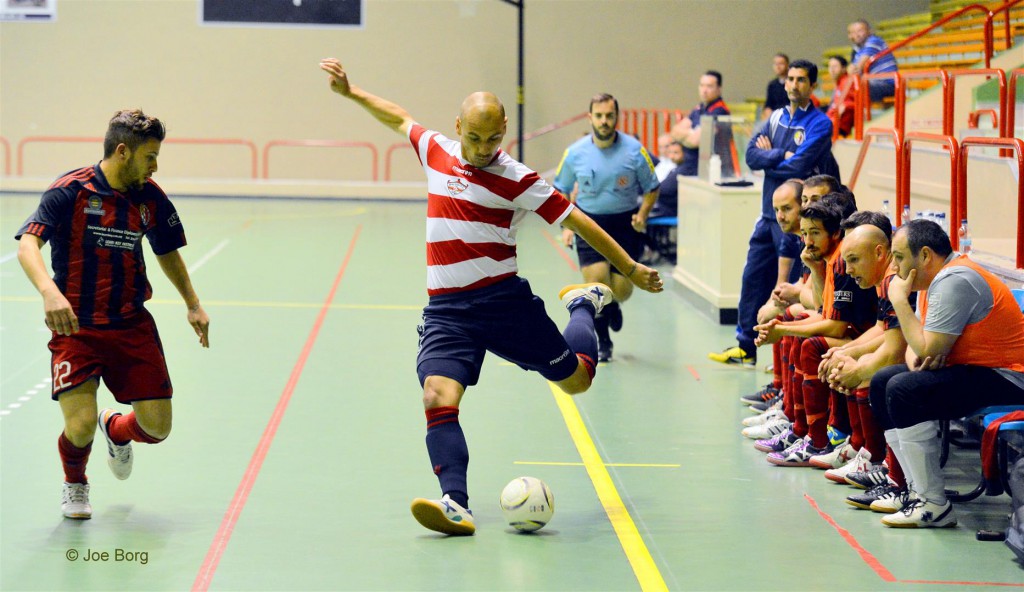 Balzan continued their championship hopes alive after seeing off a bold Hamrun Spartans side 7-2.  It was a collective performance by the KO finalists who found their player/coach Gabriel Dobre in fine form after netting a hat-trick.

Despite the score it wasn’t an easy game for the Balzan side especially in the first half . In fact, their opponents defended greatly and tried to operate on counter attacks.

In the second half, it was a different story as Balzan took the upperhand and scored the most important goals to secure the three points.

In the 5th minute Spanish Cristian Cuadros Silva could have made it 1-0 for his side but his low drive was cleared off the goal line by Boycho Marev.

Hamrun continued to exert pressure on the Balzan defensive department and after a series of shots by Marin Guardia and Elamari it was Balzan keeper Nicholas Farrugia who denied them with two great saves.

The Spartans broke the deadlock in the 8th minute when Cuadros Silva effected a great pass to Antonio Marin Guardia whose shot finished in the net with Farrugia beaten.

In the 10th minute, Balzan restored parity after Glenn Bonello persisted in his move and after stealing the ball from a Hamrun defender he gave the ball to Nicola del Re who hit the target from close range.

Despite all this, Balzan managed to go ahead and score two goals in one minute thanks to player coach Gabriel Dobre to end the first half 3-1 up.

In the second half, Hamrun tried to produce a reaction but Balzan continued their momentum to exert more pressure on their opponents goal.

Nicola del Re completed a brace after a good counter attack by the Balzan players to  make it 4-1.

Hamrun managed to reduce the score thanks to a powerful freekick by Cristian Cuadros Silva who surprised the Balzan keeper.

But this goal proved to be Balzan’s injection as they surged forward and managed to hit the target three more times from Emil Raducu’s  penalty (34th minute), Boycho Marev (35th minute) and Gabriel Dobre with a marvellous lob

San Gwann took advantage of Zabbar and Pembroke’s defeats the day before and joined the latter teams in the fourth position of the table after seeing off Qormi 9-1.

San Gwann forged ahead in the 4th minute thanks to their striker Shaun Vella who fired home from close range.

They continued to press the Qormi rearguard and Vella was unlucky to hit the post after a good San Gwann action.

When the clock struck the 13th minute it was Jean Bert Gatt’s turn to double the score with a shot from outside the area.

From there on, San Gwann dominated the proceedings and scored two more goals before half-time.

First it was Denis di Maio who made it 3-0 after dribbling past two players with Rudy Pace finding the net a few seconds before the interval.

In the second half, San Gwann maintained their dominant game and continued to hit the target after some defensive blunders from the Qormi players.

At the end Qormi had a golden opportunity to reduce the score but Hubert Gatt Bonello’s free shot was ably saved by reserve goalkeeper Steve Giacomotto.