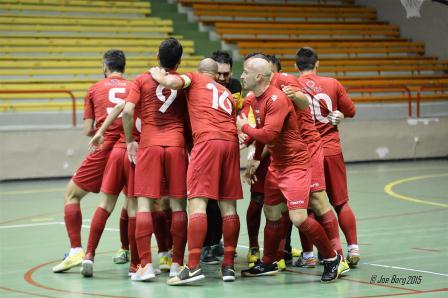 Champions Balzan and league leaders Luxol St Andrews made it to the final of the Gatorade Futsal Premier Division play-offs after overcoming the hurdle imposed by their respective opponents Hamrun Spartans and Valletta.

Balzan staged one of the greatest play-off semifinals fight-backs to beat a resilient Hamrun Spartans side 7-4 after extra-time. (aggregate 13-11).

Hamrun had two important players, Rogerio and Chris Cardona, missing for this match with the former’s absence that was certainly felt.

The Spartans swept into a two-goal lead thanks to Raphinha’s double strikes. 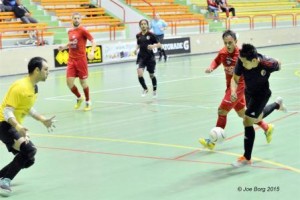 However the Champions reacted fiercely and scored two quickfire goals by Slobodan Janjic, well-served by Marev and a violent drive by Carlo Scicluna.

However Hamrun continued to impress and managed to restore their advantage through the same Raphinha after dribbling past keeper Nicholas Farrugia.

As the first 20 minutes of play finished 3-2, Balzan had to upgrade their attacking level to restore the aggregate parity.

In fact it was their player coach, Frane Despotovic who found the net with a great shot but Hamrun were back in advantage as Rodrigo slotted in after a rebound.

The match continued to intensify as Despotovic completed his personal brace after putting the ball into the top corner of the net and level the matters for Balzan.

Balzan’s player-coach opted for the flying keeper to pile more pressure on the already tired Hamrun rearguard and find the crucial goal.

One attack after the other, the Spartans had to succumb to Balzan’s goal one minute from the end as Mark Zammit slotted home a perfect Marev pass to make it 5-4 and put the match into extra-time.

The extra-time was no story for Hamrun as Balzan continued on the offensive and managed to score their sixth goal through Boycho Marev, well-served by Glenn Bonello.

James Ciangura, the Spartans mentor, opted for Raphinha as a flying keeper to level the matters, but in doing so, they exposed their defence with Balzan’s keeper Nicholas Farrugia taking advantage to score into the empty net and assure of his team’s place in the final. 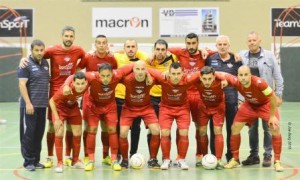 Luxol were a different side from the first leg as they brushed aside Valletta 9-1 to obtain a comfortable qualification for the play-offs final. (aggregate 15-5)

Valletta tried hard to react and had quite a good amount of shots at goal but found Luxol’s keeper Adrian Attard in fine form as he performed a string of important saves.

On their part, the St Andrews outfit were lethal in front of goal and managed to find the right moments to score their most important goals.

Peter Pullicino surged Luxol ahead while William Barbosa doubled the score after a goalkeeper’s blunder.

Pullicino, well-served by Barbosa, completed his  personal brace to make it 3-0 before the break.

In the second half, the plan of the match didn’t change so much as Luxol continued to surge forward, with the Citizens trying to absorb their opponents attacks.

Three more goals by William Barbosa and a brace by Florin Anton together with strikes from Matteo Desira Buttigieg completed the rout for Luxol as Valletta scored their consolation goal through Fabio Bandeira.

Balzan and Luxol will meet in the best of three play-off final to be played on May 8th, 15th and 22nd at the Corradino Pavillion. 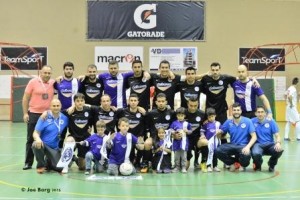