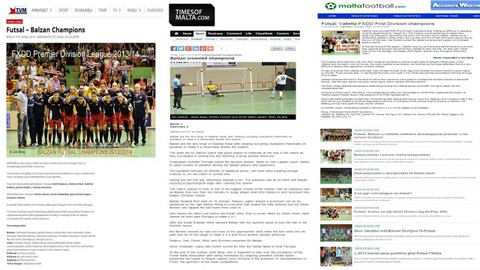 For the second consecutive year, the two journalists on board, Stephen Azzopardi and Robert Busuttil will keep on bringing futsal closer to all local media.

During the last season, futsal was covered on almost all local newspapers, tv stations, news websites and on some radio stations.

In fact futsal was regularly covered on The Times of Malta, The Malta Independent and In-Nazzjon.

For the coming season we will strengthen our relations with the Sunday’s newspaper Illum and the daily newspapers Malta Today and l-Orrizont.

There were instances where futsal was covered on www.sportmalti.com thanks to Stephen De Battista and www.sportinmalta.com.

We can confirm that sportinmalta is ready to cover futsal on a regular basis.

In the coming weeks, we’ll contact inewsmalta and kullhadd to extend our coverage on their respective websites and newspaper.

We shall continue weekly coverages on the sport news on TVM, together with features on Kontrattakk, links on Radju Malta 2 during the weekend and coverage on RTK Radio’s news bulletin.

Another big achievement for the coming season will be to fine tune an agreement with Replay on Net TV and strengthen our contacts with ONE Sport.

Finally all this work from our journalists would be in vain, without the improved performance of all the teams participating in the Futsal’s Premier and First Division.