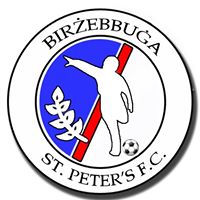 As the Premier Division is about to start, today we’ll have a look at one of the new promoted teams to the highest local futsal division.
Way back in the beginning of 2011, the idea of amateur futsal teams to be amalgamated with a local club affiliated with MFA was being spread in public. The hard work committee of Birzebbuga St.Peter’s Fc decided to initiate a new project which will enhance the club structure and the reputation of the club in general, as nowadays futsal has become part of life especially with amateur players. Neville Farrugia Cann was handled the task by the committee to coach the team in its opening season. Its objective was to give former club players a chance to learn the game as well to generate an interest with the public of Birzebbuga.
Fortunately till this day the futsal team kept the signature of former senior team players Noel Tabone, Clive Formosa and Matthew Axiaq. Other youth players who came from the ranks of Birzebbuga joined the squad with the likes of Andrea Cutajar, Glen Farrugia and Aaron Dalli. We can say that in our squad we have a combustion of old and youth players, which it will bring determination to succeed.
After participating in the futsal league in the last two seasons, the club managed to clinch the third division championship in 2012 and gaining promotion to first division in 2013 thanks to these players mentioned above and other dedicated players. This summer, the club was preparing to face an uphill task in the first division, however due to the omission of some clubs from the association, a new and a big challenge arose in the premier division. We are going to try our best but this adventure will help us to enhance our futsal knowledge and trying to salvage our status in the highest division of the association.
Birzebbuga Squad for this coming season:
Goalkeepers – Glen Farrugia
Victorio Ciantar
Players – Christian Barbara, Gabriel Farrugia, Randall Schembri, Matthew Axiaq, Andrea Cutajar, Aaron Dalli, Clive Formosa, Roderick Grech, Haitam Saghair, James Galea, Luke Baldacchino, Wayne Vella, Noel Tabone
Team Coach/ Club official – Brady Bugeja
Technical Director – Neville Farrugia Cann
Team Manager – Neil Portelli
Club president – Joseph Mangion
Club secretary – Anthony Azzopardi